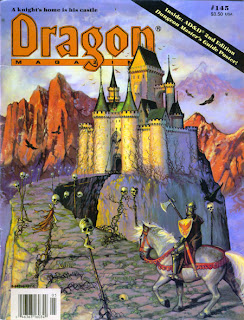 I mentioned this issue two times last year, in a post about randomly-generated castles and stuff. I had call for this venerable issue of Dragon recently, as I needed...uh...a random castle. So I pulled it off the shelf and got to looking at it.

"A Castle Here, A Castle There" by Daniel Salas, is the article I'm always talking about. It expands upon the table in the DMG to help you create a castle at random.

"Holding Down The Fort", by Matt Iden, serves a neat purpose, too. Y'see, back in Ye Olde D&D Dayes, a PC who got to a certain level could build him- or herself a stronghold. Why not? They've earned it! So, now that a PC has house and home, what happens next? Behold a table of random events that might befall this lofty keep. A spy appears! There's a racial clash amongst the populace! An entire patrol goes missing! What's Lord 15th-Level to do?

"Strongholds Three" is straight-frward: it presents a trio of castles, ready for use. Maps, thumbnail descriptions and hints on how to use 'em. Nothin' but meat.

"Your Home Is your Castle", by Patricia Cunningham-Reid, discusses the offensive and defensive architecture pf medieval European castles. A fun, informative read which will doubtless get your tactical gears grinding; plus, you can learn why castle staircases are usually round, which can make for challenging encounters you bet.

"Bazaar of the Bizarre - The magic fortress: magical items for fantasy castles" is just what it says it is.

Not only does this issue review some now-classic computer games like "Gold Rush!", "Wizardy V" and the old "Star Wars arcade game for MS-DOS, it also has a nice, in-depth review of 2300 AD and a few of its supplements. I love these old dragon reviews; they're thorough and even-headed more often than not, and they reach back to a time when gaming mags were about gaming, not just about one company's product. Granted, Dragon was largely focused on D&D, but it still pointed out other companies' stuff for its readership.

The mag is rounded out by some book reviews, an article on painting miniatures' faces, a piece of fiction and some "DragonMirth" comics...and the last-ever "SnarfQuest" strip. Love it or hate it, Larry Elmore's fantasy adventure strip was a mainstay for many years, and it offered gorgeous pen-and-ink art, more than a little inspiration and his trademark beautiful women. It's a landmark any way you slice it.

The advertisements make for good nostalgia. There's a full-page, full-color ad for "Battletroops - A game of urban man-to-man combat in the Battletech Universe" with art by Dave Dietrick, an advert for WEG's then-nascent Star Wars RPG line (consisting of 18 proucts, all pictured), and an ad for the brand-new, forthcoming, game-changing Advanced Dungeons & Dragons 2nd Edition. "your toughest opponent shouldn't be the rulebook", it proclaims.

Last but not least, it features one of my favorite pieces of FRPG art ever: A painting called "Saving The Best For Last" by Daniel Horne. It was the cover of a previous issue of Dragon, but here it's inside, shilling Dungeon. No matter; I smile every time I see it, because for reasons I cannot interpret, this image never fails to fire up my desire to game. Here, what's it do for you? 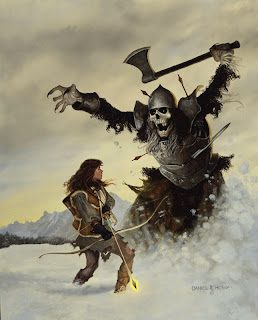