In Case You Missed It: Skills In OD&D

Badelaire has a great little blog post wherein he argues that OD&D class abilities, hit points and so on are, in fact, skills -- albeit not codified as percentile chances etcetera. And you know what?

My appreciation for the older rules grows by steps, and part of me wonders -- has everything in game design since then been an unnecessary refinement, too much effort put into something that should have stayed simple and sweet?

That part of me shuts up pretty quickly, though, because I don't really believe that. I like reading rulebooks too much. However, the question does get pretty close to what my blog is (ostensibly) about: unlearning what you've learned that you may reach the simple truths.

I'm still conflicted about thief skills, though. Abstracting exploration and experimentation is damn handy, but it's potentially less flavorful and less chllenging. I like that whole "I'll look under the bed -- carefully, though, slowly lifting the bedskirt with my dagger, ready to jump back at the first sign of movement" approach to playing the game.

And now, for no damn good reason: 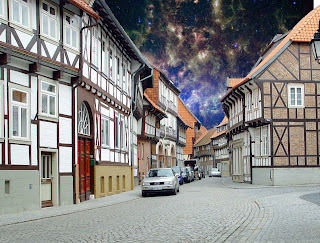 Wearing Tap Shoes To The Rodeo

I did some stand-up tonight at a local club. Wednesday night's open mic night, see. I did it three weeks ago with moderate success -- success enough to try it again.

So I put together my set: stuff about Phoebe Cates and robots and sacks full of gnomes and a superhero named Monosyllabic Man. I brought energy, I brought delivery, I brought giddy delight for all things odd.

To a room full of college kids.

I was dying up there; it was critical. I was on, I was doing it, I was totally there. But it wasn't working. I finished my five minutes and I was done.

I didn't get the laughs, but the guy who talked about trying to pee when you're drunk and you have an erection? Belly-laughs.

"Your material is funny," one of the judges later told me. "You just have to find a way to make these people comfortable with odd. Emo Phillips did it; Judy Tenuta did it. You just need to find a way to work it in."

On the one hand -- yes, it's infuriating. Being totally outdone by "If I make the push to piss, you'd better believe shit's gonna be flyin' out the other end" is really annoying. But on the other waldo...there's a time and place for weird, and Frat Night ain't it.
at 22:26

If you haven't, read the comments in the previous post -- then give Mr Mike Krawec a big damn hand for Going There.
at 22:15

Conan Shows Up Looking For A fight

Paranoia 2nd Edition rulebook, p.104, under the heading "...And More". That's where I found my muse. 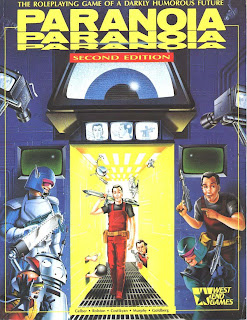 I've embraced brainstorming as a creative technique, and I do it this way: I decide on a topic and start throwing crap at the page to see what sticks. No idea is too dumb; if i think of it, I write it down. Pump it out, clear the channel for other, better ideas. Plus, who knows? An idea that looks dumb now might spark the development of a BITCHIN' one later. Hey, it's happened.

So -- the Paranoia connection. There's a section in that old rulebook that's about making up your own adventures, and it gives you lots of scenario ideas. After listing a series of bare-bones adventures, the section closes out with the aforementioned "...And More" header, which is followed by a short list of one-sentence game-sparking ideas. The first item is Conan shows up looking for a fight.

Somehow, it has become a ritual for me to list that as my first complication, situation, goal or what-have-you when I start throwin' stuff down, regardless of game setting and genre. Dunno why; maybe I just think it's funny.

Or maybe it's just to remind myself that anything, no matter how simple it may appear at first, can be fun.
at 23:21

Perusing the Swords & Wizardry fora, I came upon this quote by Mythmere, which might just explain why it is that I'm drawn to the game:

0e wasn't just its rules. It was an approach, an attitude. 0e was the "hobby" version of this game, and beginning with 1e the game turned away from this do-it-yourself, change-what-you-like attitude and began to become "official." When something becomes official, it begins to fill in all the little questions that need to be answered, because if it doesn't ... then there's no official answer. From a hobbyist's approach, that's no big deal. No official answer? I'll make one up. Recapturing the 0e mindset, that "hobbyist" approach, is one of my goals - it's not so much in the rulebook I've written, but it should become much clearer when Knockspell Magazine comes out. 0e was about imagining the living shit out of a basic, vague, rudimentary game system.

Boy Scouts, 0e And Things I'd Rather Not Eat

So...yeah, this whole "0e" thing has really captured my imagination. Swords & Wizardry and A Quick Primer On Old-School Gaming did the trick, and I'd be a big fat stinky slimy grit-eatin' liar if I said I weren't jonesing to twirl up a game based on their combined inspiration.

So I'll say no such thing. 'Cause, you know..eyeww, grit.

I'm enjoying the idea of D&D as a game of exploration, where the players' wits are engaged in the discovery of in-game information. Be it traps and secret doors or NPC motivations and personalities, I am enticed by the notion of moving away from abstract die-rolling to pry and learn.

However, I can see prep taking a long time for that style of gaming. 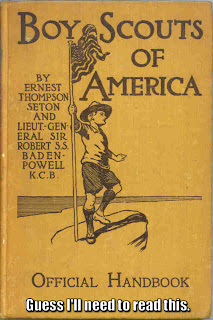 I don't know a damn thing about this stuff, so I'd hafta haul off and learn. And that means prep time, for research and development.

That's the rub, right there. See, one time I tried running a game for my wife in a style much like this. Her character had trailed an assassin to a sewer/dungeon, and was intent upon finding him therein. When it came time to describe the clues she might follow in tracking this mofo through the dungeon, I was at a loss -- I had no idea what kind of tracks a dude leaves in a moist stone corridor.

Given my tendencies towards obsession and perfectionism, you can see why I feel a bit of trepidation underlying my enthusiasm. Then again, there's the usual Rotwang! caveat: I may be overthinking it, and worrying too much.

Yeah, I know...there's a hole in your heart and it's shaped like my blog. Let's catch up, shall we?

Standup!
I've only done one night, but I'm starting to do standup comedy in a local comedy club. The club's brand-new, and a buddy of mine owns it. He asked me to come in for Open Mic Nights, and...well...I did. It turns out I didn't suck, even if I didn't win the prize (a paid gig opening for a pro comedienne), but I got to wear my tie and do some funny.

Gaming!
Not much, lately. My daughter's bedtime is later now, so my wife and I really no longer have time to game after she goes to bed. This weekend, though, we are hosting our Annual Halloween Game, whereupon Leaky Pete and I will be running a pair of goofed-up Risus scenarios. Here's one of my pre-gen PCs:

Okay, so here's what happened: it was during finals at "Basher" Bukowski's Pro-Wrestling Polytechnic, and you were in the ring with another student. You were supposed to pin him with a Figure-Four leg-lock but instead, you made him disappear. Just, POOF! Like that.
They never found him, and you were forced to drop out. Soon after, though, you received a mysterious school application by mail, and you found your real talent: Magic! Not just card tricks and illusions, but true sorcery. You've combined the showmanship you learned for pro wrestling with your ars magica to become a world-famous stage magician. By the way, the reason you haven't graduated wizard school is because you still haven't found that missing wrestler... 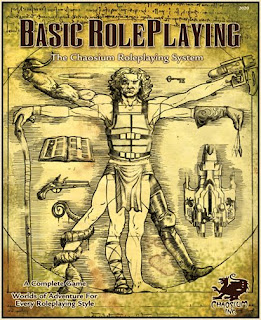 Basic Role-Playing!
I bought this at Gencon and had it mailed to me. I really, really like it! I'm glad I bought it. It's great. I want to do too much with it. I don't know where to start. RRRAAAARRRGH!

Though I might start with a riff on an old campaign Stormbringer called "Rogue Mistress", and do a planar/multiversal sandbox with characters from various realities as the crew of a dimension-hopping flying galleon. Think a mix of Planescape, Spelljammer and a dash of SF stuff, and you're in the ballpark.

I like the fact that the system is so damn direct, and that it's so simple to process in your head. It's a worthy addition to my games shelf and I really, really wish I had the time to run the damn thing. 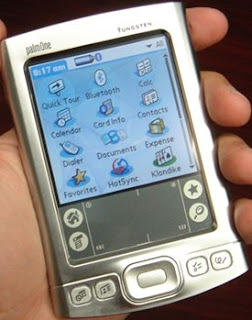 Palm Tungsten E2!
I got this as a birthday present, and it's rad. not only can I put appointments and games and crap on it, it came with a program called Documents To Go, which lets me create and edit Microsoft Word docs right on my palm! I used it to write up the above PC while we were out shopping. Now I don't have an excuse for not getting my write on.

Swords & Wizardry!
Holy cow! This thing is great! It's a retro-clone of the 1974 D&D rules, which is to say, totally old-school. No thieves, no skills. Just some character creation rules, combat rules, spells, monsters and sundry. Having read the most excellent Quick Primer on Old-School Gaming, I'm keen on firing this up and seeing what happens. I totally put S&W on my palm, too. SWANK. I ain't giving up on C&C yet, but I am very, very drawn to the notion of playing Swords & Wizardry, too.

Sammy Terry!
...will get his own entry, because meeting him was totally awesome. Plus, he called my Mom an idiot, which was hilarious.

Since I Can't Think Of Something To WRITE about... 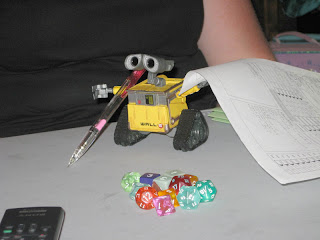