Hey, kids! I made a character sheet for Star Wars 2nd Edition Revised & Expanded. Get all clicky and you can have one, ya crazy kids!

Actually what I did was I ran Star Wars, and I ran it proper, with West End Games' Second Edition Revised & Expanded. It's my preferred rules set, although there are others I deem worthy of the task but I digress.

(These notes come straight from my own post-game record. I loves me some Evernote, you guys.)

This was the first scenario, which I ran with my buddy Jake and my wife. Jake played a bounty hunter named Jasper; my wife played a former Twi'lek slave girl named Narah Tei. They are both rebel operatives, and they have a starship called the Soccoran Sunrise.

Their contact in the Rebellion is Hix Belsar, who sends them to the planet Lambria to make contact with a slicer named Laal Spandau. Spandau supposedly had information that the Rebellion can use, but she can't transmit it, so the PCs have to go get it.

Lambria is an arid world on the Outer Rim, and it's just acquired an Imperial presence. There's a patrol cruiser in orbit and a facility that can launch TIE fighters. When the PCs arrive at the cantina ("The Grotto") where they're supposed to meet Laal, she's not there; a local miner named Targge tells them that Laal had been captured by the Imperials and possibly taken to a garrison nearby. Just then, Stormtroopers show up.

A firefight commences, and Targge is Stunned (2D minutes) while Jasper and Narah blow the crap out of the 3 Stormtroopers -- but not before one of them can call in reinforcements. An attempt to escape goes awry (the back door opens onto an alley with three more Stormtroopers, so the PCs close that door and go back the other way), and another batch of Stormtroopers had to be dispatched. Jasper carries Targge through the skylight and rolls a 1 on his Wild Die in so doing, causing it to shut down. He's still able to mess up some Stormtroopers from the roof, though. Narah takes out more Stormtroopers in the cantina and then gets out. Jasper tries to fix his jetpack and fumbles again! Finally they make an escape.

Deciding to get lost in the crowd, they head for the central market. Narah stays out in their landspeeder while Jasper goes into Ragno's Small Engines to get his jetpack fixed. Unbeknownst to him, the R1 droid in Ragno's employ is an Imperial spy, and it calls in Stormtroopers to capture Jasper when he comes back for his jetpack. The PCs still manage to escape (again), but this time, they are intercepted by biker scouts! Jasper los both of them and the party returns to the ship.

On the ship, Targge uses the comm to find out that Laal is still at the garrison, but is scheduled to be taken off-world in an hour. What will the PCs do next...?

That's where we left off, but now that my wife and Jake both have weekends free, we are in good shape to make it a campaign. And I hope we can, because after I finish this particular scenario, I have my sights set on something I've had for a long, long time... 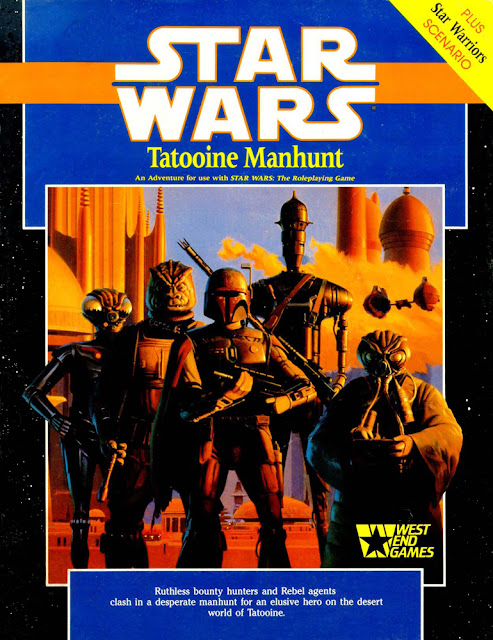