Look...I'll put it like this.  If you haven't checked out Dave Ferris' Irvania.com, what with its free wargames, wacky fictional nation and copious images of miniature guys with sticks and robots wearing ties...

May yours be like mine -- Merrily spent with family, with food, with fun and with love.

I Am About To Live One.

"And here's a poster of the Landmaster from Damnation Alley."

Troy Allen had seen a lot of SF that I had never heard of.  He was older than me, and sometimes it seemed like his past had taken place in a long-gone neverwhen lost to me through time.

"Aw, maaaaan!  You haven't seen Damnation Alley?"  Alan Rice, too, seemed to know of this distant wonderland; he was the one who introduced me to Troy, after all.  Maybe that's where he found him.

Troy smiled, a big-ass goofy smile.  He may have squinted with delight to have another shiny memory to share.  "It was a post-apocalyptic movie.  They had these vans, see, with the wheels...."

He and Alan went on with this little bit of my nerd education (nerducation?), there in Troy's grey-lit room in a little house somewhere in Harrodsburg, IN.  I couldn't tell you where it was, now.

Troy, man.  Troy knew a lot of stuff, and when he told me about stuff like this the gleam in his eyes and the glee in his voice made me want to fall in love with them, too--these ephemeral things that I knew I'd never see, these obscure and unknown tidbits of my geek heritage.  I'd written them off, though, as things of another world, never to be seen by me.

Standing in Troy's room on a cold winter day ca. 1990, I would never have dreamed that, when babies born that week would finally be able to get legally blasted at a bar, I would be idly browsing the DVD selection on the Monroe County Public Library's Bookmobile and that there, in orange and yellow, those words would stare back at me, plastic monolith of mystery revealed.

It's missing the header and footer images, and the NPC illustration was usually a cameo inside the frame, but I think it came out pretty OK.  Illustration totally swiped from the Star Wars Artists' Guild website, and modified a bit by me.  No offense, Blooburd. 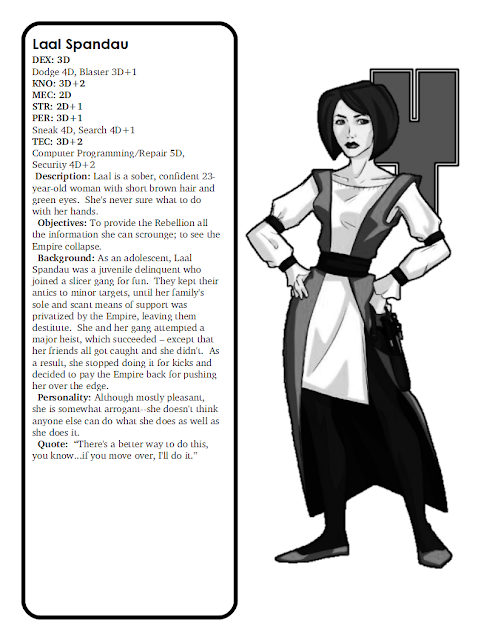