-- no, my wife was driving. And anyway, I did this in the parking lot at JoAnn Fabrics. ANYWAY, I wrote down some ideas, as they came to me, for games I could run with MS&PE. I reproduce them here for your amusement:

PS I'll get back to ya on the Jammin' Jim thing, but the short version is: Nothing much has happened yet.
at 20:37

I Hope Lead Is Tasty, 'Cause IT'S BULLET-BITIN' TIME

Sittin' here at my desk, at work, right?  Bein' a cool little Fonzie.  Door from the tooling room opens and in steps Jim.  "Okay," he says, "who in here has played Dungeos & Dragons?"

Jammin' Jim's in his early 50s, and he sculpts dies for a living.  Dies, as in tooling dies -- here at work, we make stuff outta metal.  I have no idea why Jim's gotta know what about D&D, but, hey -- I am an ambassador.

"Okay," he says.  "I was tryin' to play it with my grandson and one of his buddies, 'cause we got him the starter set, and I was flippin' through the books and I couldn't figure out how to get the second player in.  It comes with two books..."

And I think, Damn.  'Cause he's teaching his grandson to play from a 4e product which I've never even seen and I don't know what advice I'll be able to give, that's why.

So anyway, Jim describes a bit more of his dilemma and I do my best to grok him.  From what it sounds like, the intro scenario in the new red box is a programmed adventure for one player -- but it's probably not for one player, it's just that Jim's not sure how the paragraphs relate to a group and not just one player -- and when it would be another player's turn.

Okay.  Okay.  I'm gettin' Jim's problem, now.  I try to explain the difference between such a programmed adventure and regular play, and about combat rounds and initiative and stuff.  But then I say, "Look -- you wanna bring the game in tomorrow?"

"I can bring it in later today," he says, "if you wanna have a look at it and see what I'm doing wrong."

"It's a newer edition, and a lot of us grumpy old guys are real 'Nyarrr, raaaawrrr rawwwrrr!' [you know grumbly noises] about these new rules," I caution.  "And I don't know a lot about the new edition.  But let me have a look at it and I'll see what's goin' on."

And then -- then.  Then, my spine stiffens, my jaw squares, my gut steels and dammit, I know What Must Be Done.

"Yeah," says Jim.  "If I tell them I figured out what was wrong, they'll try it again."

"Say, Jim...why don't we get organized and I'll run a game for the three of you."

So today, my friends, today...I will be looking at the 4e rules.

If You Want My Body, And You Think I'm Sexy

Thanks to all the readers who pointed me to The Wormworld Saga as the source of yesterday's image.  It certainly looks worth my time to read the wh--

Some Guys Have All The Luck 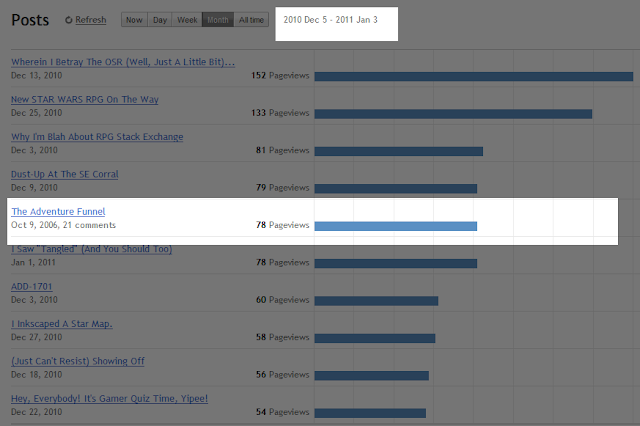 So I'm knockin' around the idea of a starship combat game inspired by Chainmail's troop-type battle system, and informed a bit by A Sky Full Of Ships.  Dig:

KILLS ARE ON A “6” UNLESS OTHERWISE NOTED
Okay so basically: When your ship attacks my ship, cross-reference your ship with my ship and you roll so many dice.  Each "6" (unless otherwise noted) is a "kill".  After so many kills, a ship goes blooey.
Fighters are at a bit of an advantage -- they're small and hard to hit, but a a good barrage can wipe them all out.  I dunno about Destroyers vs. Battleships, though.  I just wanted each ship to be able to roll at least 1 die.
I'm not good at this.

I Saw "Tangled" (And You Should Too)

Like it says up there:  I saw Tangled.  Disney movie.  Got a princess in it.  Handsome dude.  Horse.  You know.
Like it also says, you should see it, too.  Okay, maybe not should, 'cause it's not life-or-death, but definitely could do much worse than to see it, too.  Reasons, you want?  I got 'em.

THE LONG MADE SHORT:  It's fun.  Genuinely so, at that.  It's a very entertaining film that breaks the Disney mold in places, and, to my mind, that needs to be rewarded.  Vote with your wallets, folks.  THIS COMES FROM SOMEONE WHO, TRADITIONALLY, GIVES DISNEY THE STINK-EYE.  (More on that later.)

MORE INFO THAN THAT:  Listen, did you hear about how Disney was going to title the film Rapunzel, but switched marketing tactics and tried aiming it more at boys and parents instead of just at girls?  It's true; The Princess And The Frog pleased critics but wasn't a big box office performer, so someone at Disney said -- "Well, hell, cousin, let's make movies for girls AND boys!  Get more butts inna seats!"

IT WORKED. The movie is fun even for a cranky-butt like me.  Plus...it's making money.

Money, as you know, talks.  In this case, the money that you spend going to see this movie (besides snagging you a better time at the movies than TRON: Legacy was), says something to Disney.  It says, "Break that mold.  Push a little bit.  Cast the net wider.  You can appeal to a wider audience if you take that risk."

It also says, "John Lasseter has the right damn job."

Oh, you know who John Lasseter is.  Pixar, right?  The dude whose Wikipedia entry says he is

Chief creative officer.  Calling the shots, in other words.  Ever watch an interview with him?  I have.  Guy loves animation.  He is an artist first, businessman second.  He wants to take animation places, and bring you along for the ride.

I have bitched about the state of animation before.  I have also looked down my nose at Disney's output for a long time -- perhaps unfairly, I generally equate "Disney" with "mediocre", if not in terms of technical ability but in terms of content.  A few exceptions (Atlantis, Treasure Planet, The Black Cauldron, Fantasia) aside, their stuff makes me go ho-hum.  Well, the dragon in Sleeping Beauty was pretty swank, but for every bad-ass black dragon and magic sword combo, you get about a dozen sappy song/cute animal friend salads.  Maybe the movies are better than that, but they certainly haven't attracted me.  But they've attracted a lot of other people, and, in a sense, contributed to this notion that animated movies are for kids or, worse, just for little girls.  I have a little girl; I'm all for animation for little girls*.  I'm not for the idea that animation is just for a given section of the population.

So all of a sudden, here's Disney -- in my mind, the worst offender because of what they could but wouldn't -- suddenly switching gears, and casting the net a little wider.

It's not Heavy Metal.  It's not even Titan A.E. or Sinbad - Legend of the Seven Seas.  But it is most people's synonym for animation, Disney, taking a chance.  Taking a chance and succeeding, by making a movie that truly has stuff for the whole family -- I don't just mean that it's family-friendly, in that there is nothing objectionable (which there isn't), but rather by making a movie with something everyone in a family can enjoy.  A movie with a heroine that'll inspire little girls without being sappy, a hero young boys will want to pretend to be, a pair of villains you'll want as NPCs in your D&D game...


...a movie with gorgeous art direction, smooth animation and truly beautiful lighting; a movie where some of the best comedy business is delivered by a perpetually-drunken dwarf in a diaper.

In a Disney movie.

Go see it.  Tell that damn mouse to keep up the good work.

*(My little girl prefers Batman Beyond and Rocky & Bullwinkle, though.)
at 20:42