You need this today.  You need it.

Not in a...you know, like a Leon/The Professional kind of way, or in a "The Golden Age of Wireless" kind of way.  No, no.  The best way I can parse it out it is thus:

It's bad-ass in a "Bob Ross Totally Schools That Canvas With Some Phthalo Blue" kind of way.

Look -- the plot is dense, but so engaging as to be astonishingly navigable.  The characters are interesting and compelling.  The setting is misted with a sense of history, permeated with substance and depth.  And even though (or perhaps, because) there's no real action in the, you know, KA-BOOOOSH! sense of kinetic action, the plot unravels with a genuinely seductive pace.

It's all in the pacing.

The plot develops at a pace that seems slow...until you realize that you've been reading non-stop, and watching the world and its people and its details and its travails and its history and its everything being peeeeeeeeeeled open and revealed to you in --

-- Bob Ross.  All mellow, he'd take his trowel and kinda drag it over the canvas, and BAMMO HAPPY LITTLE TREES?

I just want to keep reading so I can find out what happens next.  In fact, why the hell am I sitting here typing this when I could be reading the next cha--
at 22:44

Dr Rotwang! Presents THE FINAL WORD ON HOW TO BE A BETTERER GM GOT-DANGIT

Take off your pants and run in the opposite direction, 'cause that way lies madness.
at 20:52 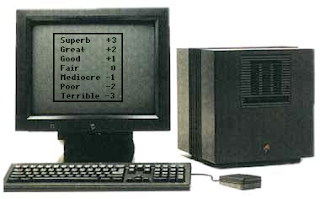 Look, don't get me wrong -- I like FATE 3.0 juuuuuust fine.  It's a great use of FUDGE, and some might say an improvement upon its progenitor.

I will not argue, because I agree, really.

FUDGE, in its most basic form (like it was when I downloaded it from ftp.soda.berkeley.edu on that late Spring afternoon in 1994, on a NeXT computer at the IU Student Union) is --

-- look.  There's something to be said about a game that gives you a fully-playable character with no more effort and paperwork than this:


Honest, man, it took me longer to figure out how to make OpenOffice Writer do the cool split-cells thing than it did for me to write this character up.

In all the time that I played GURPS, which I did with considerable intensity, I never once wondered what a 0-point character would look like.  (And if I ever did, I must not have spent a long time wondering.)

Tonight, I was looking through GURPS IOU and came upon the section that discusses appropriate point levels for characters in that milieu.  Local Citizenry, the book states, would rate 0-100 points.  I began to wonder...then, I popped open GURPS Character Builder and started, uh, buildin'.

Jerry's an average guy. He likes sports, he's kind of quiet, he's a bit of an artist and likes to hang out with his friends.

But the talking broccoli in his fridge, the time that a Martian princess rear-ended him at the grocery store, and the regular wrong-number calls from Steven Hawking and Eleanor Roosevelt's ghost? THOSE things are obviously NOT normal, and they WEREN'T his idea, and he kinda wishes they wouldn't happen.

So I guess he lives in whatever town IOU is in, and maybe his life and the University intersect a lot.

How D&D Sounds To Me

On your way to spend the Summer with your Dad in Kansas City, your old family friend Jason Gucinski gives you his own old copy of the D&D Red Box.  Yours, now.

This is it.  You've been in the room a while but you came in from the side.  Now, you have THE KEY THAT OPENS THE FRONT DOOR.

Phasic Knights of the Blade and Blaster

Renault, Smartest and Wisest Halfling, got a knife which (functioned as a crappy shortsword), killed a bug, fell in 3" of water, put out a fire at the worst time possible, and then got eaten 'cause I had to take a shower and go to work.

Next time I do some Google Hangouts gaming, I'm hooking up my camcorder to function as a web cam.  That was some stuff, I tell ya.