Yeah, the "15 games in 15 minutes" thing is happenin' here, too, since I haven't posted much and I'm shamefully stalled on the PBoM thing.  I changed jobs, see.

There's no real ranking here -- kind of stream-of-consciousness.  This Lean Cuisine's pretty good.  How you doin'?
at 13:47 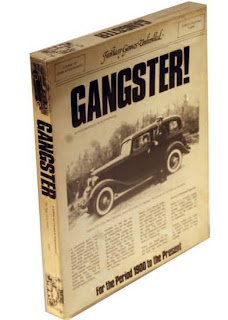 Right!  So!  "Gangster!" was Fantasy Games Unlimited's "Game of crime and punishment" which was "For the period 1900 to the present", which was 1979 but could cover pretty much the whole 20th century.  The front of the box, and the cover of the main rulebook, gave it a 1920s/1930s feel, though, as do the scant interior photos -- one of Al Capone, one of some rum runners driving over the frozen Detroit river in 1930 and a crime scene photo from the St. Valentine's Day Massacre (!!!) certainly suggest a setting.  But essentially it's Cops & Robbers, and you can play both sides of the law.

I'm not going to review the game as a whole, because others have done it better already.  However, I DO want to point out a couple of things about it that I think are totally aces -- chiefly, the skill system.

So here's how it works:  Anyone can attempt any skill, but your attributes  give you expertise.  Anyone can drive a car, for instance; you just roll 1d20 < Dexterity (attributes being generated on the classic 3d6 bell curve).  However, if your Dexterity, Agility and Strength are all 10s, you get a -1 to that roll.  If Dex, Agility and Strength are all 12s, take a -2; if the three are 14s, take a -4.  Presumably, a guy with Dex 14, Agility 12 and Str 12 would get his -2 because his stats qualify him for it, even though his Dex leads the pack.  Dig?

You know what I think of this?  I think this is nice.  It's pretty clean and low-maintenance, and it even kind of makes sense which is a bonus.

Ah, but I said I wanted to point out a COUPLE of things.  A couple is two, and here's the second:  The 16-page ancillary "BOOK 2 - PATROL GUIDE AND LAWS OF THE LAND", which is no less than a quick reference guide to doing cop stuff.  F'r'ex, what do you logically do at the scene of a serious crime? When can a police officer leave his or her post?  What priorities do cops on patrol have?  How do search warrants work?  What are the limits on wire taps?  How do you set up a road block, and would you like to see a diagram?  And what the hell is larceny?


So it's a neat game.  Old school in its approach to things (no setting, challenge the player moreso than the character, etc.).  Plain-looking, but legible.  A little disorganized but eventually easy to reference.  Perfectly playable as-is, you ask me; you might need to kloodge together a few skills for modern-era gaming (computer use and the like), but otherwise totally serviceable.


I got my copy for free as a gift from the legendary Chris Engle, and it included some sheets from his game.  One of these days I'll scan 'em; there's a neat map drawn in blue ballpoint.  Swank.