I walked into the Waldenbooks at College Mall in Bloomington, IN, with $30 in pocket. I saw these two books: 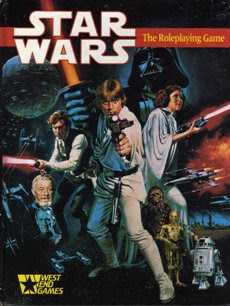 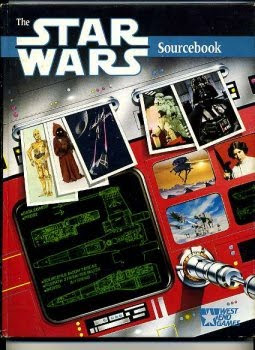 I had no idea what they were for -- just that they were a game of some sort. I liked Star Wars, I liked games, and each book cost fifteen bucks.

Not much time for this post, but -- here's some cyberpunk inspiration I've had lately. 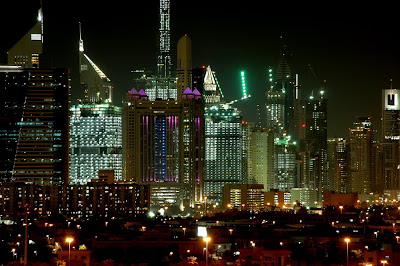 ONE
You heard that Dubai is in financial trouble, right? What would happen if the companies building those crazy-ass resorts suddenly all went bankrupt -- who'd move in? What would happen? Wouldn't that be a kickin' setting for a cyberpunk game -- an extravagant metropolis on the skids, fancy hotels converted to apartment blocks full of your typical cyberpunk characters? Hmmm...

TWO
Yesterday I mentioned that thing about La Movida Madrileña, and how pop culture exploded all over Madrid after Franco blah blah blah? You'd hafta play fast and loose with your future history, but it strikes me that you could use that as a hell of another premise for your cyberpunk setting: a culture released from opression that can suddenly go crazy and do whatever the hell it wants -- and there's cyberware. 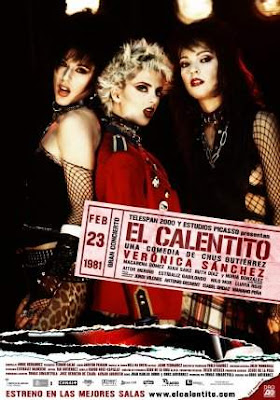 Damn, there's some pretty good Spanish-language pop, synthpop and New Wave. Why the hell haven't I dipped into this well before?! Was it because of the sour taste left in my mouth by Timbiriche's cover of "99 Luftballons" in 1984 (or so)?

Actually I have blog reader José Viruete to thank. See, back a few months ago when I posted about a Las Mexican Go-G-- er, I mean, Flans, José dropped me a link to a video of a Spanish New Wave band performing on Italian TV.

It was only a matter of time before I said to myself, "Okay, so...what else?" Thus I started myself a Pandora station for the stuff, aaaaand... 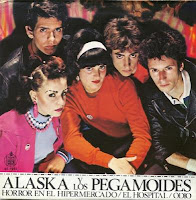 So it looks like there was a New Wave-esque movement in Madrid back in the late 70's/early 80's, born out of the sudden freedom from Franco's regime. It's much deeper a thing than I have summarized here (click the link and you'll get a better taste), but the bottom line is this: It produced a ton of synthpop I'd never heard of, and to me, that's like suddenly getting a millionh dollars in gold from a team of laser-powered dancing bears.

And it's not just out of Spain. There's been some pretty good stuff from all over Latin America, too -- Mexico produced a modern act called Belanova, which I've approved on my Pandora station, and there's stuff from Argentina and all over the place. I'm just getting started.

And the best part?

I CAN UNDERSTAND WHAT THEY'RE SAYING. 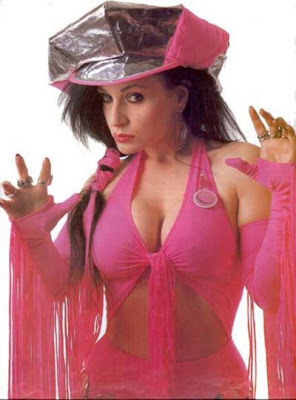 "Merry Something To You"

Thanks to Mike for the tip.

I'm Tired Of How This Blog Looks.

The D6 System And Why I Love It (For Moni)

Yeah! That's right! I'm answering a comment with a post of its own, again! It's MY blog, suckas, and I DO AS I PLEASE! I AM THE DUKE OF NEW YORK!

...yeah, okay. So new blog reader Moni asked, "What would you say are the best aspects of the system?". Good question, Moni (and welcome to the blog, by the way) -- not least because I feel it is important that I am able to articulate my opinions on stuff instead of just spraying them around like water from a firehose.

So...here's what I would say are the best aspects of the system. Got your reading feet on?

1 - IT'S DAMN EASY TO PLAY.
D6, in all of its incarnations (from the old Ghostbusters game that became D6 to the latest stuff) has never been big on fiddly-bits and rules. They've always been clear-cut: Roll as many dice as your skill code, add 'em up, and see if you beat the difficulty number. In some cases (combat), you figure the difference between one roll and the other. There's not a lot of room for error or doubt in that.

3 - IT'S DAMN EASY TO PREP FOR.
Few things really require stat blocks in D6. Those that do aren't very demanding. Once you get a feel for what levels of competency are described by what die codes (1D feeble, 2D average, 3D gettin' it done, 4D awesome sauce, 5D badass, etc.), NPCs can be thrown onto the page in a trice. Dig:

It took me longer to decide on "Gunslinger of Mars" than to write down the skills. Hampton here is now fully statted out for whatever shenanigans in which he's meant to engage. I can now worry more about what he looks like, how he talks, and how he's gonna die.

4 - IT HAS BITS AND BOBS THAT YOU CAN TAKE OR LEAVE.
Seriously, all the perks and complications you see in Mini Six? We never had those back in the day. They're nice, I like them -- but leaving them out ain't gonna break anything. Trust me, I made do without 'em from 1988 to, like, 2002.


Well, Moni, I hope I answered your question. If I have not, then just say: "No, Doctor Rotwang!, you have not." I will try again. I'm a big boy, I can take it.

Still, the best answer I can give you is this: Go play with it.

You know of course by now about Mini Six, AntiPaladin Games' streamlined, condensed, totally free game built upon the D6 SRD. You read the blogs; nothing gets by you.

What you might not know is that I have downloaded it, read it, and pronounced it AWESOME.

There was a time in my life when I wasn't a fan of the D6 system, but that was prior to 31 December 1987 when I purchased the first edition STAR WARS rulebook, so...never mind. Anyway, the game is OGL now and the designers are off and running with it.

This thing has it all, and it mixes rules from 1st and 2nd Ed. STAR WARS with stuff from the later D6 iteration to terrific effect. You'll get character generation, optional perks and complications, basic rules, some equipstuff, a bestiary, some stock NPCs, vehicle combat, magic...even tips for customizing the game's components to your heart's desire. Seriously, you can totally run a campaign out of just those 7 pages.

I was glad to see a few neat 1st Ed SW concepts revived in Mini Six. I'm thinking specifically of vehicle move ratings being expressed not as absolute values but as dice, which are rolled along with piloting skill dice for the resolution of chases. I hadn't realized that I missed the abstraction of vehicle speed; somehow, reading the brief but totally serviceable rules in Mini Six, I suddenly thought: "Oh, yeah...!"

There are a few things I'd change, but not many (mainly, base melee damage dice and scaling bonus dice) . Still and all, I don't see anything in there that doesn't work just fine as it is.

If you've never tried a D6 game, or if you just want a 7-page condensation of what you know is a badass cinematic game...the link is up there. You may use it.
at 12:34

Bring Your Beef To WRASSLETOWN!

Okay, so you know how you wake up in the morning and your brain is totally like "I'm awake! No, I'm asleep! Burgundy flotilla bears!" and all kinds of dumb stuff is liable to fly into your consciousness?

That's how I thought of Wrassletown.

Actually, I only thought of the word -- somewhere between my bed and the shower (approx. 7 feet), and after thinking the words "Figby & Sarp", who...I dunno who they are. Anyway, I got in the shower and cogitated on Wrassletown.

Wrassletown is a place for your Mutant Future campaign. Situated in a fairly safe valley, it is THE destination for entertainment, commerce and even law. Sort of like Bartertown, yes.

It began as a travelling circus, a group of able-bodied survivors roaming together for safety. They didn't have much to trade at the scattered towns they found in their travels, but one of its members, The Ultimate Hogan (the two-headed mutant result of the apocalypse-caused fusion of Hulk Hogan and The Ultimate Warrior), suggested they might be able to make some trades and some friends by putting on a wrestling show to amaze and amuse the locals. After all, just because you live in an irradiated wasteland where the living envy the dead, that doesn't mean you can't enjoy watching a tentacled rat-man pile-drive a walking cactus into the mat -- right?

Within just a few years, word of the travelling wrestling show got around, and The Ultimate Hogan (quickly become the de facto leader of the group) saw the benefits of settling down. They sought out a valley and set up shop. A permanent ring was erected, tents were battened down, and the people came. Before long, traders and merchants came, too -- Wrassletown was born.

Someone (search me, I dunno who) had the idea that if mighty battles of good versus evil could be fought in the ring, then maybe common, every-day disputes could be solved that way, too. Now, those who sought a law of sorts -or justice at any rate- could come to Wrassletown and solve their problems in the squared circle.

Now...at this point, the reader might be -as is the author- tempted to flesh this idea out, to consider the ramifications of this rough island of civilization in the post-apocalyptic wilderness. Still, the perrceived need might be a false one. After all, think about this:

Special thanks to Leaky Pete for this whole "The Ultimate Hogan" craziness.
at 12:12

First, Because I'm Thinking Of It: Elizabeth Perkins Is Hawt

The TV here inna break room is showing Big, and it's the part where they go on the date, and she's wearing the black dress, and ROWR.