SERBIAN WOMEN ARE WAITING TO PLAY D&D WITH YOU!

The following story is 100% true. It'll sound dubious at first, but no -- it's legit. I've changed names to protect privacy blah blah, and I'm paraphrasing some of it, but...troof.

I help moderate a FB group for local gamers.

NO WAIT THAT'S NOT THE INCREDIBLE PART

In the far, far future of mankind...they apparently remember Flans.

I'm developing a space opera setting for SF RPG shenanigans, and this is the 'map' of the known, inhabited star systems. It's a map that I created, so it looks like, and has names on it, like this: 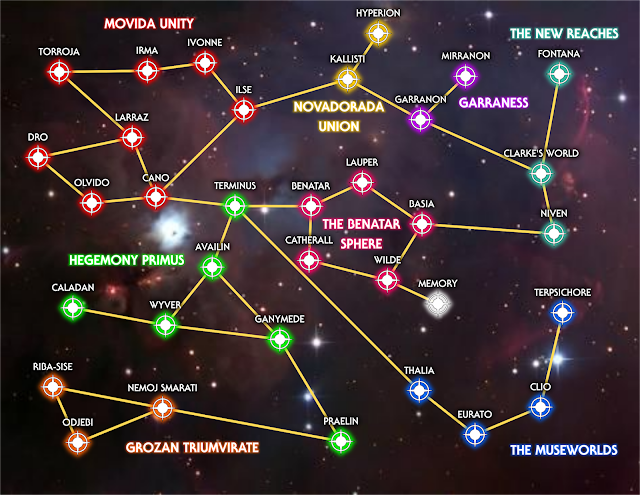 Most of it is inhabited by humans. I'm limiting non-human PC choices (for reasons); there is a species of 4-armed and very theatrical humanoids called the Garrana (whose worlds are in the center-top, haloed in purple) and a sub-species of Replicants (as in "the ones from Blade Runner, but emancipated and no longer limited by a 4-year lifespan"). You can tell that the Replicant 'homeworld' is the one with the white halo, because it's called Memory. BECAUSE BLADE RUNNER. GET IT?!

But what you probably can't tell is the reason why its only connection to the other stars is with Wilde, in the Benatar Sphere. [If you haven't figured it out, or aren't an 80s music nerd like me, note that the worlds of the Benatar Sphere are named after female singers popular in the 1980s.] As it turns out, Kim Wilde, she of "Kids In America", wrote a song called "Bladerunner", and released it on her "Teases And Dares" album in 1984. The song was inspired by the film of the same name, and featured sound effects from same. Hence the connection.

The Movida Unity, in the upper left, is composed of star systems named after Spanish and Mexican singers (and, in one case, a band) likewise from the 1980s. "Movida" means "movement", and refers to the cultural Madrid Movement (or Movida Madrileña) of that decade; "Olvido" is the first name of the Mexican/Spanish singer better known as Alaska, while Irma, Ilse, and Ivonne are the members of Mexican girl group Flans. (Irma ususally went by Mimi, but that didn't look or sound right.)

Most everything else explains itself, except for the orange systems in the bottom left. One of my players is Serbian, so I snuck in those worlds to amuse her; the names are "Fuck Off", "Don't Bother Me", and "Girl-Boobies". "Grozan" means "grouchy", since my player looked at those system names and commented, "It looks a very unwelcoming place to be".

As for why these names are still relevant in whatever future century we're playing in...there's no explanation other than "I like it that way and I think it's funny".

What's this? An I Waste The Buddha with my Crossbow post?! MADNESS!

So a thing happened, and it is this: that over on Reddit, there is a post about a Kickstarter for a new cyberpunk game called Retropunk. And the post title asks, "What do you think?" So I thought. And I began to reply, but as I did so, I realized that what I was saying belongs less in that Reddit thread and more on, oh, maybe a public platform where I can spew forth thoughts and stupid jokes and obtuse referncIT BELONGS HERE ON MY BLOG.

So here I am, and here's my response.