I'm having lunch right now and the TV's on in the breakroom, and you're on it. It's that movie you made with Jennifer Aniston. I notice that you're screaming a lot.

You do another trick, right? 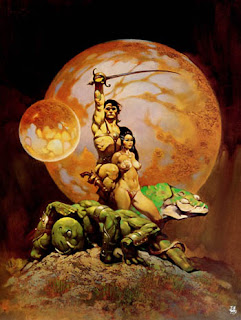 Recently I was reminded that, back in the 1930s, there was almost an animated feature film based on Edgar Rice Burrough's "Mars" stories.

I say "almost" as in "test footage was completed". Click the link and you can see it, and hear animator Bob Clampett talking about it. Listen for the enthusiasm in the dude's voice. 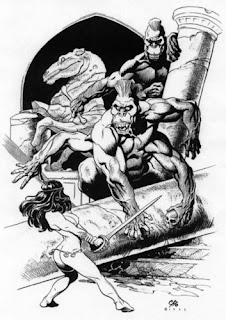 So. Why do I need a Time Machine? Well, y'see...Clampett and ERB's son Jack approached MGM about producing a series. MGM liked it...but then someone shot the idea down because they thought Tarzan would sell better than John Carter.

Had the project been completed, animation might be totally different today -- and likely for the better.

But no. Because no one would believe that a guy might be on Mars having adventures, cartoon or no.

I'm gonna build a Time Machine, and I'm gonna paint noseart on it -- a pretty girl with her fists held up, a devillish grin and a wink to the viewer. And next to her, the craft's name in big, cursive letters:

"The Retroactive Asspunch Express".
at 13:45

The other night I hauled a little box of toy cars out of my Mom's basement, intent on giving its contents to my daughter. Needless to say she's digging ownership of some late 1970's Hot Wheels, but we're both really enjoying having also found therein this: 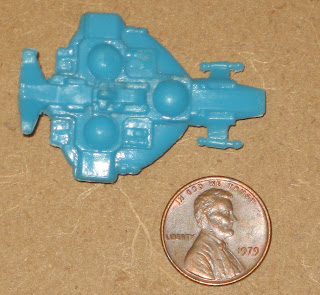 This little starship toy dates from no later than 1981. I have no idea where it came from, and although there's a logo on the bottom which appears to read "Rigo", Intarweb searches turn up nothing.

I'd love to be able to reproduce it and field a bunch of them in a Starmada game, granting also that I could find someone to play with and the time to actually do so. 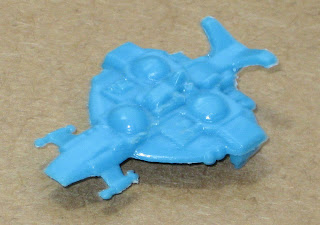 Meanwhile, my daughter Lily has christened the ship "The Jammie-O", and it's already landed a couple of places.

He shakes his head no.

But I don't care. 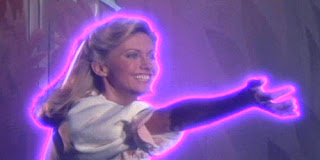 I love this movie, right in its face, unabashedly, unconditionally and unyieldingly. I saw it when I was 6 and it captured me for a Summer; I've see it again as an adult and I can tell how bad it is but that doesn't matter, at all. Why? because Xanadu is as freaking feel-good as you can get, it's stuffed to the gills with early New Wave costumes, there's miles and miles of leg and tons of random stuff lights up FOR NO DAMN GOOD REASON.

Furthermore, it doesn't care what you think, either. Sure, it ruined Michael Beck's career, barely broke even at the box office (mostly it sold records) and was nominated for a bunch of Razzies the very first time anyone nominated anything for a Razzie, but -- there it is, doin' its thing, with the legs and the lights and the Don Bluth animated sequence and the cult following and a song by The Tubes and the Broadway musical and stuff lighting up, including people.

For the sheer, pantsless joy of it.

The fact of the matter is, if you sit down to watch this movie and you don't feel just a little bit better after it's over, you are a Commie. Or perhaps you are dead, so get off my couch.

Xanadu -- The Encounter Critical Of Musicals.
at 22:46

A CMG I Can Get Down With

Close Personal Friend of Mine Nathan "NateBot" Letsinger just so happens to be the RPG Line manager at Privateer Press. You know, WarMachine? Natch.

So I pop open my e-mail to-day and notice -- hey, there's a message from Nathan! Swank!

Privateer is getting into the Collectible Miniatures Game (CMG) market, and they're doing it with a game called "Monsterpocalypse'". 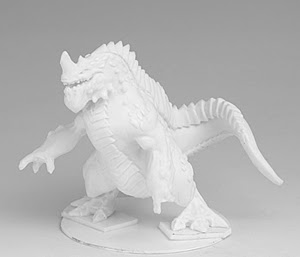 You can read the press release right here, but the gist of it is: Collectible kaiju minis, pre-painted and random-packed, which "will launch with over 80 figures in the initial set and will include large-scale monsters, destroyable city structures, and vehicles."

Now...little plastic monsters and scale buildings are cool enough for starts. But when the terrain is interactive, you're playing in a whole new way.

I betcha that in playtest, everyone who gets to knock over a building goes, "BRRRRROOOOOOSSSSSSCCCHHHH!" when they do it. If they don't, they're a Commie.