Cliffhangers, Myth And Hot Rods: How I Run STAR WARS

Okay. It's long since been established that STAR WARS was my first game, and that it's my favorite, even if I don't run it all that much.


Everybody runs the game differently, I think. When I run it, I try to capture a certain feel -- I have a specific impression of the setting that I like to emulate in style, content, mood, etc.

This impression is probably colored in part by the GM advice in the 1st edition rulebook. There's a section wherein the author (presumably Greg Costikyan, andnot an editor or other contributor, wrote this bit) makes a list of what STAR WARS is, and what it isn't. I don't have the book handy at the moment, so I can't quote it, but it basically says that STAR WARS is not hard SF, it's not about building the supergadget that solves everything, and so on. The author argues (quite rightly, I think) that instead the focus is on melodrama, sense of wonder, and so on.

I agree. I agree, but I simplify. I go back to the source, and look at what George Lucas was thinking when he created the whole thing.

And my impression of that is this: Cliffhangers, Myth and Hot Rods. 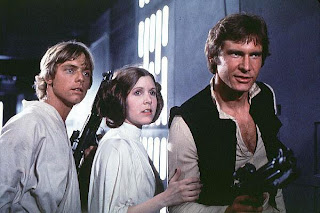 It's no secret. Hell, you read Skywalking too, right? In writing STAR WARS, he was trying to emulate the high-adventure Saturday-morning serial shenanigans of Flash Gordon, Buck Rogers, Commander Cody and their ilk. It's obvious when you watch the movies (the OT, anyway) that it's pulp adventure in space-age clothes. That stuff pressed his Wow Button when he was kid, and he wanted to make something that would press it for you as well. I can tell you that it worked a charm for me.

How does that translate into my games? Action and wonder, cousin! I strive for constant action. Conflicts aplenty, happening all the time. Swoop races, running gunfights, foot chases, starship battles, arguments -- I try to keep the pace moving. It doesn't always have to be some kind of physical conflict, mind you. Although such conflicts are more direct, the occasional melodramatic subplot can be just as tantalizing and attention-getting (and even plot-driving!) as wrestling Gundarks.

If the PCs aren't in a constant state of having to do something that might go wrong, then I'm not doing it right.

Oh, and I like the exotic locations -- or at least evocative prosaic ones. Palaces made of marble and crystal one game, greasy-floored garages the next. So long as they take you somewhere. 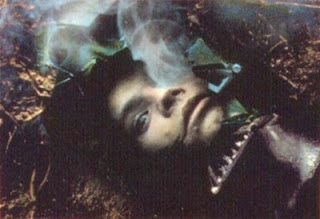 This is pretty obvious too. STAR WARS is a version of the hero's journey, what with Luke going from farmboy to hero with the help of the old wizard, and fighting the dark king and etcetera etcetera. You know -- The Power Of Myth and all that. George hearts him some Joe Campbell, boys.

Frankly, I don't elaborate on it overmuch -- at least not consciously. I prefer to be guided subconsciously by the epic/mythic yadda-yaddas in the process of gettin' mah STAR WARS on. It's just kind of second nature, really. That's why my good guys are good, my bad guys are bad, and the former will triumph over the latter. Anybody in a grey hat, so to speak, will eventually lighten or darken. I treat the whole thing as a principle as opposed to a rule. 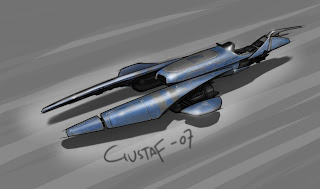 Lucas is a car guy. If you doubt this, go watch American Grafitti. Luke had a speeder; Anakin stole a nice one. Both were pilots. The Falcon is a souped-up junker that's faster than she looks. Speeder bikes go real fast; so do starfighters. Like I said: Lucas is a car guy.

Ergo, as a STAR WARS GM, I do not forsake the hot rods. Good gods, I'd never dream of it. I gotta have my vehicles in there -- and they have to go fast. Why is this important to me? Well, think of it this way: Why do drag racers, uh, drag race? It's the need for speed, baby! VROOM VROOM! There is power and excitement and danger in these things. They don't have to take center stage, but really -- can you imagine STAR WARS without turbo-fast space-cars?

Just as important as what I do is what I don't do. Just like I wouldn't pour caramel on lettuce, there are some things that I prefer not to jam into my STAR WARS games.

Been there. Done it. Ran back as soon as I could. I tried injecting cyberpunky themes into a STAR WARS game once, and it failed. Dystopia and desperation simply don't go with mythic tales of space fantasy. No horror, either -- STAR WARS is exciting but not scary.

I seldom, if ever, like to drag stuff in from other worlds. That means no Klingons, no X-Men, no Giger biomechanical monsters, no Predators, no Schwarz. ESPECIALLY no Schwarz. Crossovers with STAR WARS just don't ring true to me. The universe is big enough as it is, with lots of room for my own inventions; why co-opt? Now, inspiration from other sources is a different matter, but still and all, I find that I rarely need it.

Sorry, but no. Just...just no. The OT pushed my Wow Button; Tales of the Jedi did, and so did Knights of the Old Republic. In the end, though,what really gets my doggy leg jigglin' is Stormtroopers, TIE fighters, a band of Rebels and space gangsters.

Luckily it's cheaper than I thought. But -- DAMN. I try to express how much I like what I've heard of Soda Stereo's 1985 album Nada Personal, and it's like I'm trying to tell you how delicious a taco is while I'm eating a dozen of 'em.

Free Map (You Know You Want To)

Here. I scribbled this today at work, and you can totally have it. 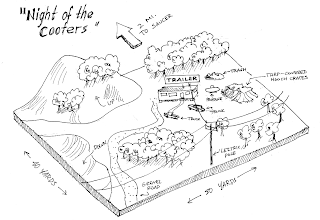 Click to amplify!
Not related to the Harold Waldrop story of the same name, my map for Night of the Cooters was inspired by a few things: The want of a map for a quick D6 Adventure skirmish, the desire to draw a map in this angled, fake-o 3D projection, and an Engle Matrix game inspired by the Kelly-Hopkinsville Encounter of 1955. Only my scenario, obviously, involves a staggering amount of illegal hooch.

(As an aside: The Kelly-Hopkinsville encounter -- Is It Is, or Is It Ain't? I'm skeptical, not because I dismiss it as bunk but because the evidence is scant, so it can't be proven. Probably never will. Until then, though -- hell of a story, eh?)

So...yeah, the scenario is pretty much all there. Obviously here's a downed saucer, a trailer and some rotgut. We can assume that "2 mi. to saucer" means "a short hike for some aliens", and that "trailer" and "illegal hooch" mean "hillbillies with shotguns". Who the PCs are is up to you, as is the exact situation -- do the Good Ol' Boys mistake attempts at peaceful First Contact for space-boogers cruisin' for, uh, Really Close Encounters of the Wrong Kind, or are those saucer-rats really-for-truly a bunch of complete bastards -tinfoil suits notwithstanding- who will shoot you daid an take yore tipple? Whichever, my friend. It's all you. Take! Take and enjoy.

I Never Claimed To Be Funny.

So I ran the first session of my Pulp Art Nouveau Spelljammer thing, with Savage Worlds as my rules. Went pretty well, even with 7 players -- which made combat take a while.

Still and all, I'm excited.