New Year, New Game. My wife and I decided we were -once again- sick of NOT playing, so we're doing something about it.

The plan: One or two Sundays a month, our daughter goes to Grandma's for the day. Around Noon or so, our friends come over and we play Castles & Crusades.

It's simple! So simple. So simple, in fact, we never got around to it. Ever since we had a kid, I think we sort of deluded ourselves into thinking that our time was no longer our own.

We're going to trade off GMing, too--the group we're assembling has 7 people in it, 5 of whom are experienced gamers and GMs. My best friends John "Party Gorilla" Buchanan and Kyle "Hamster" Mayes and I of course have been playing together since high school; my wife has been gaming since she was out of high school, which amounts to the same amount of time. Leaky Pete is no stranger to these shenanigans, so he's cool. The other two are relative noobs; Anjiko-Z has already played a bit of BESM (and that Traveller PBEM that I've discussed here before), while Allison "Yucky" Gross has, like, no clue, but she's game. Plus, she and my wife are getting to be "besties", as Yucky puts it. These twenty-somethings, they talk funny.

In other words: not only will I get a break from GMing once in a while, I'll get to play with great friends AND hot chicks.

I am excited. You should envy me.

Here, check out the invite I e-mailed to everyone: 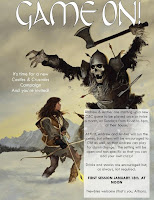 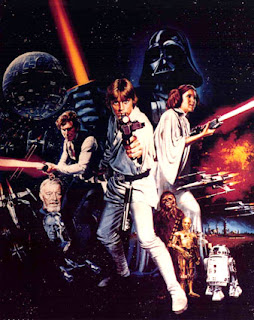 Sure, sure. We've aaaaall of us seen it. Big deal. But that's the problem--me, I got so familiar with it that I kind of forgot what makes it special.

I also kind of turned my back on it for a while.

Now...I'm not one of those "George Lucas Ruined My Childhood" types, but I'll tell you straight away that those prequels simply do not do the trick for me. I went to see them, yes. All three. Bought the DVDs. But I really don't like them! And this whole "Clone Wars" business is getting out of hand. I'm just tired of it.

And I shall not get started on the "Special" Editions.

The truth is, though, that thirty-two years later, that damn thing is still going, and there's a reason for that: It worked the first time. It worked damned well, it set the freaking world on fire, it came out of nowhere, into a post-Vietnam, post-Watergate world, and it brought space battles and a princess and a rogue and a young knight and a Wookiee and a wretched hive of scum and villainy and no irony at all and masterful editing and stuff you'd never seen before and by god it took you places and it found your WOW button and it mashed it over and over like a jackhammer and YOU LOVED IT.

We ALL loved it. People who didn't think they'd love it, loved it.

All of that because, in the end, it's a good movie. Really, you wanna know what I mean? Sit down and watch it sometime, and keep track of how it moves, what it does. Make note of how the characters are brpadly--but strongly--defined, and how the world is immersive and astonishing but casual in its wondrousness.

Then, pay special attention when Luke and Han take Chewie into the detention level, to bust Leia out of the pokey. There's that little bit of tension--"Where are you taking this...thing?!" And Luke and Han kind of fumble through and they're about to get caught and BAM! HELL BREAKS lOOSE! PYEW PYEW PYEW, ZAP, BOOM! "RRRRRAAAAAAAWWWWWRRRR!!" PYEW PYEW PYEW! THE MUSIC, AAAH! WHEEE!

And from there on out, it's a rollercoaster. The pacing is bloody brilliant. You're on pins and needles for these characters, you care about them, you're SO SURE THEY'RE GOING TO GET SMASHED IN THE TRASH COMPACTOR, but when the droids shut it down you let out a breath--didn't you? You'd been holding it, probably didn't know it. Then, you laugh nervously when C-3P0 says, "Listen to them, Artoo! They're dying! Curse my metal body, I wasn't fast enough!" And then you get a chance to breathe, and it starts up again. Then, the good guys win, and they get medals.

Movies kinda weren't like that in '77, and I think that, today, they sort of still aren't.

Happy New Year, by the way.