Full-On Bummer At The Half-Price Books

This actually happened last year, but I'm just now getting around to writing about it because it's become relevant again, what with me being all jazzed up about yon new Star Trek movie, y'see.

The closest Half-Price Books is in Greenwood, IN, and we only go up there two, three times a year -- tops. So when I go to the HPB and don't find any sweet, sweet used gamebook love, it's a bummer.

It's even worse, though, when I do find something that I really want, and it's --

--well, here. I've wanted a copy of the LUG ST:TOS RPG Narrator's Toolkit ever since its author, S. John Ross, mentioned it to me. I'm not a huge Trek fan (I like it just fine, but not as much as some folk) but I am a fan of S. John. His material in the main TOS book was aces, so the thought of having a whole book of it made my leg jiggle like a doggie's.

Last Summer, we popped into the HPB and I didn't find anything. I was bummed. Still, I took a last look on the shelf just in case I'd missed something and -- OH MY HOKEY SMOKES.

A copy of the Star Trek: The Original Series RPG Narrator's Toolkit. Still in the plastic baggie.

So I brighten up, and we get in the car, and I open up my prize, and I turn the cover open...

...and it's all stuck together. Water damage. Unusuable. Illegible.

I guess I could cruise eBay to find the damn thing, yeah. But what I can't buy at auction is the sudden, surprising thrill of finding the last thing I'd expected to find, and for cheap.

The Dukes Of Biohazzard, You Say?

Sometimes, I Amaze Myself.

Hokey Smokes! Did I draw this sweet dungeon map?! I think I did! 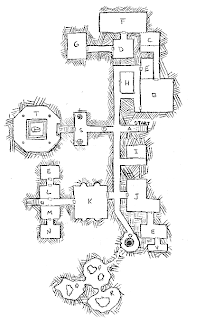 DAMN!
Sorry, I'm -- I'm just, uh, I'm...I'm really proud. Usually my dungeons look like crap. Somehow this one doesn't, so...this is a novelty, y'see. You can't see the grid lines (they didn't scan), so I think it looks even better on paper.

I guess it helps that I took my inspiration from the map in Blue Book D&D.
at 23:28 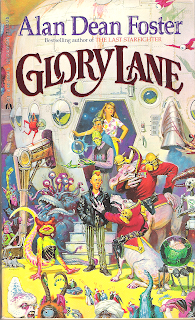 I read Alan Dean Foster's Glory Lane back in the summer of 1990 or so, and found it entertaining if not inspirational -- one of the protagonists, a mouthy, hyperactive punk rocker named Seethe Ransom, surreptitiously burrowed himself in my brain and later re-emerged as a cyberpunk character whom I really need to do something with...but i digress.

Anyway, I'm reading it again. It's a breezy read, even if the plot drags -- 115 pages into it (it's 295 pages total), still not much has happened. The premise can be summarized thusly: "The Breakfast Club Hitchhikes The Galaxy". Sure there's more to it but that's a good place to start.

What leaps out to me as potentially gameable is this part of of it: Earthlings Meet Outer Space, Hijinks Ensue. Truth be told I think I've actively resisted the idea of running a game based on that premise, but all of a sudden --perhaps because I am now older and therefore infinitely wiser-- the idea is more attractive. Today, I am more interested in a game which pits hapless 21st Century humans against the wild and wooly worlds beyond the blue, where accountants and stuntmen and art students and other mundane folk rub elbows, against their will, with --

-- well, with the crazy crap you see on the cover of that book.

The whole thing screams creaitivity, potential, fun. Naturally, it'd be a funny game, and if run as a sandbox it would require -- no, invite me, the GM, to make up all kinds of the aforementioned crazy crap to keep things going. A planet whose economy has so severely boinked itself that the only thing of real value is Tijuana Bibles? Sure. An interstellar cargo cult based on decades-old TV transmissions of Soap? Yes, please. Bargon Kaz-Moootsie, Lord Of Space, who rules the Flimpoid sector with the threat of his hideous parasitic chihuahuas? Yeah, OK. This place? Why not?! 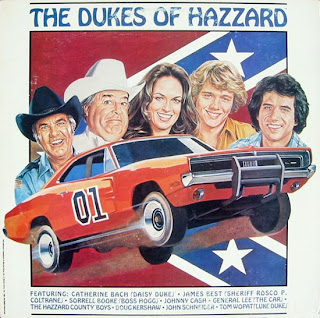 "Honey!" I said to my wife once upon a time, "The Dukes Of Hazzard Role-Playing Game!"

"NO," she replied. It was one of those anvil-grade 'no's, the kind that smashes a proposal as if it were a coyote. But I heard it whistling through the air, so I stepped aside.

"Think about it!" I enthused. "You can drive around in the General Lee, shooting dynamite arrows out the window as you jump over a crick!"

"No." This one was sharp, like a needle. I'm not into pointy things so I shut the hell up...

Of course there wouldn't be a market for such a thing (who would actually PAY for it?!), but I'm surprised to have never heard of a fan-made Dukes Of Hazzard RPG product. Not a full set of rules or even a supplement to another game. 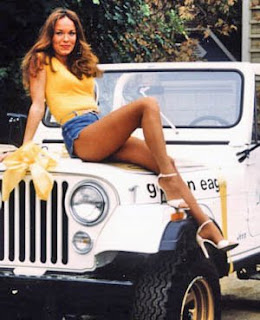 Still, I know potential RPG shenanigans when I see 'em.

Of course you can make a viable game out of it. There's a stable-enough premise: "A True Modern-Day Robin Hood". It's right there in the lyrics. Good Ole Boys (never meanin' no harm) fighting against corruption in the deep South. There's your theme and your setting, right there. Easy.

So you roll up some Cousins (the game's lingo for PCs), design a car (or just use the General Lee), stock up on dynamite arrows and away you go.

As for the tone of the game, I present the following image: 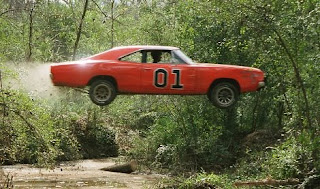 It Ain't The Size That Matters, Baby...

...it's the trouble you can get into with it.

So, I Waste The Buddha reader Forge sent me an e-mail recently, stating that he read about my C&C sandbox game and that now, he wants to develop his own sandbox setting for his Labyrinth Lord game. Good for you, Forge! Not only that you're having fun with the notion, but that you even made sense of my disjointed ramblings in the first place.

Anyway, what he really wanted to know was this -- how big was my sandbox? I replied as soon as I read the e-mail, by which I mean I totally got on my sandbox and started preaching at the poor guy. I completed my masterpiece, THE definitive word on how big a map should be, and declared it the greatest thing anybody ever said about the subject, even you.

No, seriously. What I did was to mull over some ideas and type them out, and after clicking "Send", I thought -- "Hey, this would totally not suck as a blog post."

So if Mr Forge does not mind, I'd like to share my response to him, with you. Here it is, with a few tweaks to correct spelling.

Okay, lemme pontificate on the size of a sandbox. My first advice is as follows: Don't sweat it overmuch. I did and believe me, it ain't worth it; the sandbox's size, in my opinion, is less important than the shenanigans available therein.

Yes, you'll need a map. Maps have scales. Really only two things matter in determining the size of your sandbox: how much stuff there is to do, and what scope you want for doing it -- and even that one needn't matter so much.

Still, some kind of logical framework is handy for sketching out the sandbox, therefore it's not a bad idea to toy with verisimilitude a bit. I wanted my scope to start out small; local stuff, daytrips to adventure, but with no shortage of danger. So I said to myself: Figure the average party can travel...what? 20-30 miles a day over clear terrain? That's a 20-30 mile radius in which to contain adventuring shenanigans. A little math says that's an area of 1256.63708 sq. mi. to 2827.43343 sq. mi.

Now, I don't know about you, but I don't know dingus about how big that really is. I found it easier to translate all of this into real-world terms by looking at a map of my state and seeing what's in a 30 mi. radius from my house. Easier still -- I know it's a 10-mile drive from my house to the mall. I know what THAT looks like first-person.

What kind of trouble can lie in wait on that route? That depends on your setting. Is it wilderness? Is it settled? Is it just kinda settled? Desert? Coastline? Islands?

At this point, I said, "Screw it. This is too much thinking."

In the end, I wound up running those games with my wife within the confines of three contiguous five-mile hexes. I figured a 5-mile-wide hex could hold plenty of stuffs, and so I got some hex sheets from the Judges' Guild website and went to town. I placed home base and an adventure location in one, a town and castle in another, and another town in the third. I dreamed up reasons to go to these places and called it a day. Anything else I came up with could be appended modular-like.

Of course, you may be dreaming of a wider scope. You may want stories wherein the PCs have to travel for days on end across haunted plains and through scorpion-infested mountains just to get to the Dungeon of the Ill-Fitting Princess. Make that map big, then. Maybe the adventures will be low-key and can occur within the confines of, like, Hazzard County. Really, any area in which the PCs can poke stuff with the proverbial stick is go.

Like I say, don't sweat it. Throw some stuff on paper and start playing.

However, if you want a little insight as to what distances really mean, click on this link see what's within 30 miles (or 5 or whatever) of you. Just don't get all obsessive about it like I used to...
at 19:46