Wherein I Do It Twice In One Day

On Sunday, My wife (aka Nerdy Girl), our daughter (aka Squinkle) and I (aka Doofus Maximus) piled into the Rotwang!mobile and headed over to our friend Leaky Pete's house, with some chips and sodas and gamebooks and more dice than you can comfortably swallow and by god man we gamed all day.

[Well, our daughter didn't -- she was downstairs with Mrs Pete, playing dress-up and chasing a bunny and watching cartoons and who-knows-what-else.]

Leaky Pete was kind enough to host us, along with our old friend Kyle Hamster and newcomer The Jake With No Nickname, for copious amounts of gamification and GET THIS:

It's rare enough that I get to be on the other side of the screen, but to play two games in one day? WHOA! I haven't done that since high school. And if I have, then I don't remember.

Jake led off with a D6 Star Wars scenario centered around a combat on a large pleasure barge. My character, Dak Starkiller (whom I described as looking like "a cross between Michael Beck in The Warriors and Michael Beck in Xanadu") got to be all bad-ass on a swoop and helped defeat some pirates on a Clone War-era troop carrier. He also pimp-slapped a dark Jedi...

...with the steering vanes of his swoop. 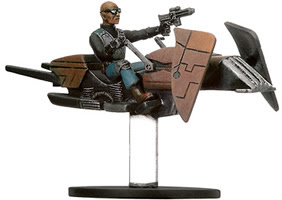 After a short break, Kyle Hamster had to go off and do "homework" or "study" or whatever the euphemism was, and Jake made a Hollow Earth Expedition character for a scenario that Leaky Pete ran. This time, we were 1920s adventurers hired to retrieve a mask and a book from a Cambodian temple. Our patron, by the way, looked like Christopher Lloyd. ACES.

We went into the temple, discovered the crazy magical portal that threw us back in time (clever -- we had to drink the water from a pedestal to do the Time Warp), overcame some traps, fought some zombies and made it back out within the deadline.

It was awesome. I never get to play! NEVER! And on Sunday, I played TWICE IN ONE DAY!

Best of all, we've been invited back to do it all again. Having Mrs Pete watch The Squinkle is a great boon, and luckily she likes the kid, so...

Maybe, just maybe, my gaming life has been revitalized.