Loooooots o'catchin' up to do. Whooooole lots. Let's start with this one. 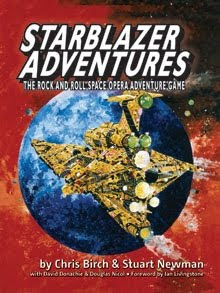 At first, I was kinda iffy on Starblazer Adventures, as some of you may recall (some of you may not, and a lot of you are saying, "What the hell is this crap? I was surfin' for catfood recipes!". You guys puzzle me greatly). I wasn't really sure what a lot of the bits and bobs were for.

Early this Summer, though, my family and I were driving home from a daytrip, and I started telling my wife about the game. I'd been re-reading it recently, and had it on my mind, so I started unravelling those thoughts to her because she was effectively a prisoner in the passenger's seat and couldn't stop me without crashing the car.

In the process of talking it out to her, the game started to gel a little better for me. Aspects started to make more sense -- specifically, their use as it differs from, say, using Stunts that might do similar things. Things that at first seemed kind of silly, like the rules for Tagging aspects, slowly started to resolve in my mind as a kind of meta-game of their own -- albeit one which, rather than distract from the story and its play, instead seemed to bolster it. 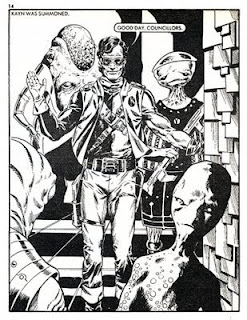 I ended up running a short session for her. It stayed short because it was a sleepy Summer afternoon, I didn't feel like winging it a whole lot, and I really didn't feel like playing a one-on-one at the time. She pronounced it "Pretty OK", while I got a better feeling for what it can do as opposed to what I was thinking I had to do with it.

It wasn't a huge revelation, but it was a significant one, and it changed my mind about Starblazer Adventures. I never really said I didn't like it; in fact, I was kind of on the fence about it. However, I can now say this:

In fact, it reminds me a bit of Theatrix, a game wich, incidentally, I mentioned in my first post about this game. Like Decriptors in Theatrix, Aspects in Starblazer Adventures can be applied to just about anything, salting-and-peppering characters, vehicles, places and everything else with potentially game-affecting mechanics.

These little tweaks help to make such things unique. Let's say that I want my game to feature two different, specific models of sports car. Mechanically, they'll look about the same; a race between the two could get kind of boring. However, I can give them Aspects to differentiate them -- and all without cluttering up the stats. Maybe one has the aspect "Turns on a dime" and the other has "Good grip on the road". Now that race sounds like it might get more interesting, doesn't it?

So. Starblazer Adventures strikes me as a game best played in a group, though. There's nothing in the mechanics that makes one-player games difficult, but rather I think those mechanics would really rev up and rock if a group could use 'em.

Now, I just need time for that group to get together...

NEXT: Remember how I was just OK on GenreDiversion 3? I've thought a bit more about that, too. Stay tuned!