So! I'm back on the creative wagon with this Spelljammer bidness. I'm feeling inspired again, and letting my brain go places for fun. It's good to be here.

First, I should mention to anyone who's interested that I'm not anchoring myself (ha!) to any one iteration of the Spelljammer campaign, at least not in anything but the most basic sense. I'm keeping all the jazz about Spelljamming helms, phlogiston, solar systems surrounded by crystal spheres, things other than suns as the "primary", wacky ships, air envelopes, the 180º plane of gravity, &c. -- not to mention the core "fanatsy RPG crap in space!" angle. Out go the Griff, the Neoghi, the Giant Space Hamsters and Realmspace/Krynnspace/Greyhawkspace; in go copious porals to other planes, art nouveau, fantasy-flavored weird science, choice Planescape stuff and whatever the hell else I feel is right. 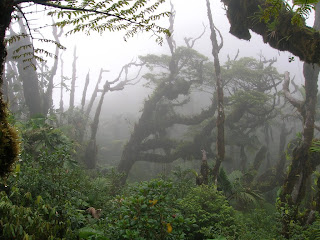 I haven't actually managed a whole lot of development so far, but what I have done is pretty vivid. I've come up with a sphere full of mist. At its center is a portal to the paraelemental plane of mist, constantly spewing outward. In lieu of planets, there are large chunks of raw earth floating about; these are covered with forest, and there is almost constant rain (roll a d6; on a 1, the rain stops for an hour). Occluded in the grey-blue haze are great stone ruins, meticulously built of fist-sized brown and black stones, mesoamerican in design. Some kind of quest item is tobe found in there, otherwise it's just a pretty -if moody- place.

I'm trying not to make too much sense out of this stuff, but I did start to wonder -- if the flow of mist is constant, wouldn't the bubble burst, so to speak? So I added another portal...this one, to Limbo. The mist gets sucked back through, like down a drain. To make things even more exciting, I made the Limbo portal free-roaming, and random. Which means that it's totally possible for the PCs to be inside one of those temples when the black hole comes a-callin', set to engulf the whole rock in T minus ten minutes...

For some reason (probably because I read it on Uncle Bear's blog and the notion stuck in my head) I've also wanted to incorporate music and sound effects into this game. I used to do that before, but fell away from it after a while. I want to keep it to a minimum --maybe just have a piece of music that's like a "theme song"for the campaign, maybe a few bits of music here and there to help set the mood for a location or a scene. As for the sound effects, I have a 2-CD set of rainstorm sounds, which would be perfect to play when we go to the aforementioned land of the Aztec rain-temples (or whatever). My only worry is that it may become distracting or worse -- annoying.

My wife will probably fight it, but -- I AM THE MAN!

Anyway. as a special bonus, here's an NPC I wrote up. She'll probably show up pretty early in the game, and she looks like Selma Blair. This is what you get when you're thinking about Sorsha (from Willow, you know), a song by Muse and girls with big hair:

DESCRIPTION: Humanoid female, age 25, 5'8", 130lbs.; an attractive woman with leonine sandy-blonde hair halfway to her waist, wearing tight brown breeches, black hip boots, a red sash and a sandy-colored tunic, with a cutlass at her side.

BACKGROUND: Cydonia was a captain in the Royal Army of Lum Ator, until that kingdom made a deal with the Illithid lord Kleizor, allowing the Illithids hunting rights -- which resulted in Kleizor secretly taking over the king's mind and brainwashing his cabinet psionically. At this point Cydonia rebelled, and slew the king himself. Now she is on the run, with her own former soldiers (now under Kleizor's mind control) in pursuit.

GOAL: Her main goal is to leave the sphere entirely, but she cannot escape without a ship. She will do anything necessary to accomplish this.

QUOTE: "No one's going to take me alive!"