Okay! Mutant Future is out. The .pdf is free, so go get some.

Since y statement above (the first one, anyway) is not of obvious meaning to everyone, please dig this: Mutant Future is a post-apocalyptic science-fantasy game from Goblinoid Games. Unlike their game Labyrinth Lord, Mutant Future is NOT a retro-clone of Gamma World; instead, it is an evolution of the 'retro-clone' concept, in which an entirely new game is built out of a retro-clone basis.

In other words, it's as if Gamma World had been built straight out of Basic D&D. There. The publisher can't say it, but I can, and I will, and I DID. Just like I downloaded a copy of the .pdf and asked for a hardcopy for Father's Day.

I've never played Gamma World, so that makes it all the easier to look at MF on its own merits. I haven't examined it very closely (I just got the .pdf last night, while Venture Bros. was on) but what I have seen has pleased me: post-apoc PCs (some of them mutants, or even androids) explore ruins, find artifacts and fight monsters (some of them mutants). Mad Max meets Thundarr at D&D's house. 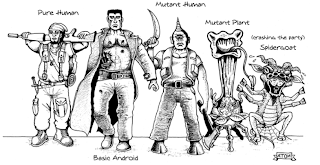 Look...I haven't read what these things are. All I know is, the game seems to be prod of their inclusion, and I for one am glad of it. I mean, look at this thing: 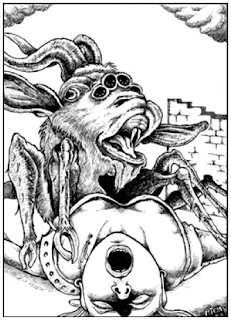 I have no idea who that girl is, but dollars will get you donuts that she does not -repeat, not- have what's coming to her in the illustration above. There's your second reason to blow that thing away, and if you don't have a first one, then...don't download the game.

While you're not downloading it, I'll be rolling up a character. Because that girl needs help, and by all that's good in the world where there's one spidergoat there may be 3 more, and they'll need killin', too.