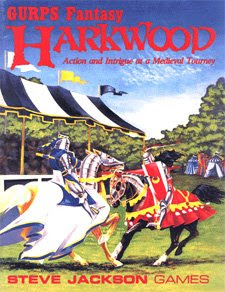 Okay, first off -- to whomever it was who unloaded this little gem at the Half-Price Books in Greenwood, Indiana...

...thank you. Thank you so, so much. Between this particular find and the Rocky & Bullwinkle coffee table book my wife found there for me on the same day, our Thursday haul was the best from the HPB, ever.

The rest of you are probably wondering why I'm so excited about having this product. In fact, many of you might even be wondering just what this product even is. So let's clear that up.

GURPS Fantasy Harkwood is 64 pages of campaign setting, customizable adventure, NPCs, maps and (then-) new GURPS rules, written by Aaron Allston and J. David George. It details Caithness, a kingdom on Yrth, the default GURPS Fantasy setting. There's with plenty of information about all the lordings, baronies, noble NPCs, etc. within -- and how they relate to each other and to the 19-year-old king who can't bring them all together.

It details the Barony of Harkwood, along with its ruler, and the bi-annual tournament that happens there.

It gives you a full action/intrigue adventure, which -as I mentioned before- you customize by choosing which of 6 villains is the mastermind behind the plot against the king.

It also gives you some new rules, but if it's no longer 1988 they're not so new anymore.

The adventure, by the way, is just a starting point for PC activities in the kingdom of Caithness. There are bunches of little adventure seeds scattered about for you to use at will, and of course the NPCs all inspire plots and stories on their own. It's useful, useful, useful.

Now...not only is this supplement impressive by virtue of putting so much information into a comfortable 64 pages, it pulls a second duty that's not as obvious: it's a hellaciously good template for creating, detailing and totally messing up your own fantasy kingdoms. I'm two whole chapters in and already thinking, I need to something like this for my stuff.

I found it in a stack of game stuff that hadn't been shelved yet; pounds and pounds of RIFTS stuff mixed in with GURPS stuff new and old (a copy of Callahan's Cross-Time Saloon, in great condition, for instance; I passed on it) all were sitting there on a cart opposite shelves of White Wolf and d20 products. Good thing I peeked.

Harkwood is out of print, but e23 sells the .pdf, cheap.