I have been quoted as saying that I'm not yet tired of plain-vanilla, bog-standard fantasy role-playing gaming because I am simply not finished with it. When I say that, I really mean two things -- one, that I'm really not burned out on it, and I really haven't been there, done that and bought the t-shirt; and also that, truth be told, I have a lot of catching up to do with the rest of you FRPG veterans.

For instance, I'm pretty sure that up until last night, I'd never run PCs in battle against a dragon.

No, for real! All this time I bitch and moan about how all I ever do is GM, so you'd think that I would have hit that up by now, right? Well...no. I've been traipsing around between genres so much that I've never really focussed on any one to exclusivity yet nor am I goldang likely to, either. As a result, a lot of stuff is new, untilled ground.

Last night, my wife and I hosted our good friends Kyle Hamster and The Party Gorilla (those are nicknames, duh) for a little old-schoolish Castles & Crusades misadventuring. We ended up with a barbarian chick based on Lux* (My wife's PC), a half-elven assassin with a silver tongue (Kyle's PC) and a gnomish wizard/snake oil peddler with a cart drawn by wolves (in the capable hands of Mr. Gorilla, which, again, is totally not his name). I made them all 5th level, they rolled up some magic items from Unearthed Arcana, and shenanigans soon commenced.

I'd cooked up the plot the night before, and it was a simple, direct one: "Go find out what happened to the last party of unfortunate mofos who got sent out into the wilderness and make sure that the package they were sent to deliver GETS delivered". Why bother with too much complexity? Let the game live and breathe because of its protagonists, I say, and leave Byzantine plotting to...um...the Byzantinites.

Anyway, the night before the hoedown, I was putting together this game, see. And I was waffling about on the identity of the opponents (in The Adventure Funnel you'd call 'em "Obstacles"). I had my main bad guys sussed out, and I'd come up with a story point where the PCs would gather a vital clue, but my dramatic intuition (actually, 'sense of not being boring') told me something spicier needed to happen about that time. I felt that my reveal needed a bit of physical action, not to develop the plot so much as to just be fun. Keep the blood flowin'.

(A QUICK ASIDE: STEVEN SPIELBERG AND GEORGE LUCAS APPEAR TO HAVE FORGOTTEN HOW TO DO THIS.)
So I was, like, "Ambushed. By forest-monsters." 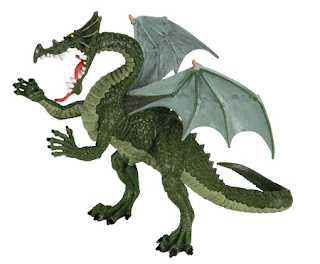 I grabbed my trusty old AD&D DMG, rolled on the random wilderness encounters, and got a green dragon.

Now...something in my head used to shy away from dragons as opponents. "Too powerful," I'd think to myself. "Wipe out the party, game over."

But that night...that night I took that nay-saying 'something' and slapped it with a truck.

It's like I said: I'd never run an encounter with a dragon before. Why continue that trend? It's a STUPID trend! Gary Gygax called C&C "The game as it was meant to be played", right? And we all know that "the game" means "Dungeons & Dragons" and so what the hell was I waiting for?

So! On game night, the PCs went off looking for the messengers, found their clue, and then, WHAM! Green dragon. No good reason other than "dude, green dragon!".

Now...for some people, running a dragon may be old hat. Some GMs may be so tired of the damn things that they wish for -or make up- fights with necromantic poodles or incendiary kangaroos or rogue Adrienne Barbeaubots** or something. But let me tell you, running that dragon was fun. I had available to me dragon tactics and stunts that I didn't even think of until this morning. Plus, got to roleplay a proud, greedy beast -- stalking pantherishly toward the PCs, demanding tribute in exchange for their lives. Through the dragon, I had the opportunity to project sheer lust for useless wealth.

And the players got to have fun, too! Kyle got to use that cool death attack ability that C&C assassins get, Amber got to rage on a classic FRPG monster, and John (The Party Gorilla! There! At last, he stands revealed!) got to pummel the mofo with magic missiles.

And they killed it. They knocked my dragon out of the sky.

That's OK; I'm not an adversarial GM. I am a facilitator of awesomeness. Last night, they had a pretty awesome fight and I played an awesome monster. The encounter didn't advance the plot -- hell, it didn't even advance their wallets, because the dragon was out of its lair. Better than that, we made a fun gaming memory.

And I got a taste of tasty, tasty vanilla.