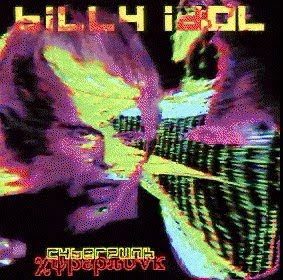 Oh, ho ho ho! You'd forgotten aaaaaaaall about this album, hadn't you? AAAAH, HA HA HA HA!! Monster that I am, HERE IT IS AGAIN. Ha!

Truth be told, it was a fairly innovative bit of work. Released in 1993, it was one of the first (if not THE first) albums to include a multimedia packet -- if you purchased the special edition, you got a floppy disk with some clip art, interviews, sound samples and stuff. (I didn't buy that one, though.) So it had that going for it. Other'n that, it wasn't well-received.

Oh, I ran out and bought it with a quickness, though. Why? I was 18 years old when it came out, it was a Billy Idol album, and it was called Cyberpunk. SOLD, sucka. WHAM! Like that. I'd been into the cyberpunk aesthetic since the late 1980s (figure '88 or so) and was really into it when 1993 rolled around. I had read Neuromancer*, Count Zero and Burning Chrome, loved Blade Runner, was totally-motally into cybernetics and was just generally in wubb with the whole thing. Also I owned this: 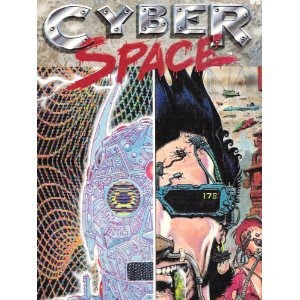 Well, no, wait. The big single from it, "Shock To The System"? I listened to that a little more. It wasn't too bad. It starts out with the sound of breaking glass, then some guitars and an up-tempo beat. Billy screams and screeches on it, growls some kinda vague lyrics inspired by the 1992 Los Angeles Riots with some askew references to Rodney King aaaannnnddd... uh... he says "c'MAWN!!" a whole bunch, and you kinda bob your head for a while and maybe you picture motorcycles driving really fast but then it's over and the rest of the album is kinda meandering and limp.

I know all of this because, this morning, I grabbed it off the shelf and popped it in the car stereo for my drive to and from work. I skipped around a lot, and ended up thinking,

"This ain't got no pancake mix."

*Reportedly, this is more than Billy himself did, despite naming a track "Neuromancer". Check this bit I found on WikiPedia:

As part of press junkets promoting the album, Idol reportedly insisted attending journalists be familiar with cyberpunk fiction. It was also revealed that Idol was not entirely as familiar with the genre as he had proclaimed. William Gibson reported in an interview, "A London journalist told me when Billy did his 'Cyberpunk' press junket over there, he made it a condition of getting an interview with him, that every journalist had to have read Neuromancer...Anyway, they all did but when they met with Billy, the first thing that became really apparent was that Billy hadn't read it. So they called him on it, and he said he didn't need to..he just absorbed it through a kinda osmosis."
at 21:26