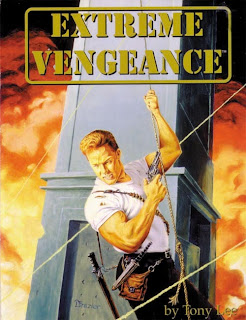 Hey, everybody! Remember all the fun I had playing Extreme Vengeance back in the late 1990s? I sure do! (I hope you don't. That'd be weird.)

I dunno if it's because I saw a TV spot for last night during The Expendables last night during Futurama, or if it's just another example of how my "brain" "works". Whatever the cause, I started thinking about this game today, and had the urge to throw together a muy macho one-off movie, why not.

Funny thing, though -- the urge is not a nostalgic one, and it's certainly not a "rose-colored glasses" thing. Extreme Vengeance is flawed; I knew it then and I know it now, and in neither day does it matter. The game is just fun.

You roll a bunch of d6s, make ridiculously bold pronouncements about your character and his/her abilities, beat the crap out of extras, get bonuses for uttering cheesy catchphrases and generally eschew "serious" gaming for the "jawsome" kind.

True -- you can engage in shenanigans of that sort no matter what game you're playing. It's not about rules; it's about attitude. Now, I don't mean "attitude" as in "the thing movie badasses have" (although that factors into this style of play), but rather a free, unconcerned attitude towards fun.