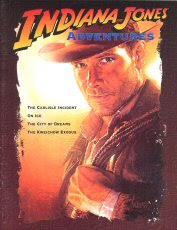 Ahoy! Zany blog reader Andrew sez to me in some comments, he sez,

As a fan of the good Dr. Jones and of West End Games, do you have any thoughts on the MasterBook Indiana Jones game? Or the D6 conversion that eventually came out for it?

Thanks for reading the blog, Andrew! And, YES! Funny you should ask, dude! I DO HAVE SOME THOUGHTS! Wanna hea- uh, read 'em?

...from there, my thoughts stray towards iced tea and a napkin. Oh -- and GURPS Black Ops, because I want that, too.

UPDATE: The Schweig tells it straight.
at 21:35