I love the creative process.

For no damn good reason, I thought of a premise for a SF game, today. I put pen to paper and here's what I wrote:

SF RPG IDEA
The planets of the Solar System are colonized. A single, monolithic mining and development consortium has control of the outer planets; Earth is impoverished, as all the money is out past the asteroids. A mining and development consortium holds a political?/social?/religious? grudge against Earth and Mars and will not supply them, will not trade with them. Diplomatic efforts are futile; emigrants are turned away; military force is useless (Earth & Mars simply don't have the muscle for it). The Inner Planets are filling up and their economy is slowing down.

Something must be done, but what? Piracy? Guerilla warfare? Inciting revolt? Social/Political subversion?

1. WHAT'S THE GRUDGE ALL ABOUT?
a. RELIGIOUS REASONS - Maybe the Outworlders (those folks past Mars) are a very isolationist, maybe even Puritan sect; maybe they're led by a charismatic prophet, like the Mormons were*; maybe they think that salvation/the Messiah/Ascension/whatever is Out There, and that it's not for unbelievers?

c. POLITICAL ONLY - Libertarians? Maybe they're hardline conservatives, maybe they're Monarchists. Maybe they founded a weird kind of corporate monarchy out there and decided, for ideological reasons, to close off their borders?

d. SOCIAL ONLY - Maybe the Outworlders have some sort of social model that they feel must stay pure and untainted to work. Maybe they're kind of like France, trying to keep their society/culture THEIRS and uninfluenced by ayone else? Or maybe they're bio-engineered transhumans looking to distance themselves from their roots?

2. BY THE WAY, WHAT'S THE TONE OF THIS GAME?
Definitely swashbuckly, space-pulp adventure. Maybe not with finned rocketships and so on, but definitely dramatic and zoomy. Maybe like Star Wars, but no Force, no mysticism -- just the space adventure aspects. 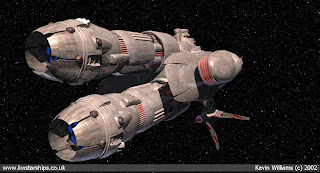 That's all I have so far, and I don't think it's any great shakes or anything. I'm just amazed that, by the simple act of writing stuff down as you think of it, you can generate so much (even between calls at work) to work with, turn, polish, change, re-arrange and otherwise goof around with.

I never get tired of it.

Image totally swiped from Kevin's Starship Gallery, by the way.

*I dunno much about the Mormons; I'm just guessing that their leader must have been a likable dude, is all.
at 12:38