The Cleft of Forgotten Swords

You wanna know why I game?

It's because of the sheer joy I can derive from simple, simple things. Check this out:

The other night, I was running some sandbox-style C&C for my wife. She was in a forest, headed for some known ruins, and chanced upon some rangers, whom I made up on the spot -- a chipper, helpful elf lass and her surly hobling companion. I rolled up names for the two, and she asked them which way it was to the ruins.

"About a mile-and-a-half west of here," said Gartheniel, chaotic-good female elf ranger level 2. "Past the big boulders and -- "

I paused. I wanted some sort of local landmark, but didn't know what. Knowing that the terrain is uneven and hilly (like Brown County, IN, just north of here), I decided it'd be a a ravine or something. 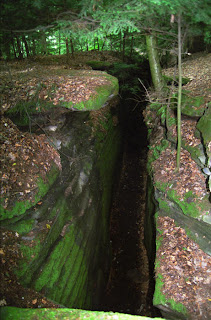 "What's another word for 'ravine'?"

"Cleft!" I said. "The Cleft of..." Then I reached for the Risus Companion, and its table of random fantasy place-names. Shooka-shooka. "Gartheniel says, 'About a mile-and-a-half west of here, past the big boulders and The Cleft of Forgotten Swords. Do you know why it's called that?' " That's a dang helpful elf.

At this point I told her what Gartheniel knew: That a long time ago, the elves of the Greywood Forest were in a war with invading monstrous humanoids. The elves were reduced to hit-and-run, guerilla tactics. One particular elf captain sent some of his men to the cleft, to store some magic swords there -- a hidden weapons cache. When the elven unit was called to action for an impromptu raid, they forgot to go back and get the swords. Consequently, the battle and then the war was lost.

Gartheniel then finished by saying, "Most of the swords have since been recovered...except for one."

Thanks to a combination of random rolls, pure gall and desperation, I suddenly had an interesting adventure location, a bit of local history and a quest suitable for a low-level character (go get yourself a magic sword!).

She hasn't been there yet (it's a 90' drop straight down into the ground and she has no rope), but she'll be back when she's prepared.

That, ladies and gentlemen, is why I love this stupid hobby.
at 12:35