The last few campaign maps I've drawn have, invariably, featured a recurring item: The Old Stone Head. I keep plopping that thing down on my map for no reason other than that I want one in my campaign area.

With a Castles & Crusades game coming up, I decided today to try out some ideas as to what, exactly, The Old Stone Head actually is.

I figured it out, but I ain't tellin'. It'll take a merry and valiant band of adventurers to go poking at the thing before I spill.

Meantime, I made an image of it (not very well) in PhotoShop: 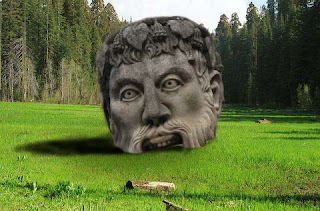