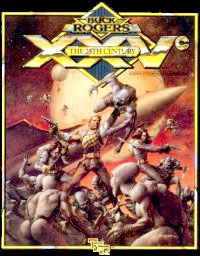 Not long ago, the subject of TSR's old Buck Rogers in the 25th Century RPG (1990) came up on TheRPGSite. As it happens, I have the game and never did much with it, so I decided to haul it out of its crate and have a look at it.

I immediately remembered why I never did anything with it, but that's a topic for a forthcoming review on the aforementioned site. That said, the game's not bad at all, really. In fact, it's written pretty well, and by Mike "Cyberpunk" Pondsmith, too.

Well, Mike's got a pretty handy (albeit brief) section on GM advice, including a shockingly good technique for adventure generation.

You might know it as my own Adventure Funnel.

Well, it's pretty close, anyway; he suggests that you start out by defining a goal, then list all the obstacles in the PCs' path, then brainstorm ways to weave those obstacles together into a narrative, providing propulsion and momentum for the adventure as you do so.

I took my process from Robin's Laws of Good Gamemastering, but Pondsmith came up with it in 1990 at the latest. I've had the Buck Rogers game since about 1994 or so. As I said, I never read too much of it.