Yeah, I'm on the bandwagon.

I can't picture just one image, or book cover, or anything else that says "Dungeons & Dragons" to me and I certainly CAN'T HEAR MYSELF THINK BECAUSE THE KNUCKLEDRAGGERS ARE WATCHING FREAKIN' "THE HANGOVER" IN HERE AND THEY'VE GOT IT TURNED UP SO GODDAMN LOUD LIKE THEY WERE FREAKING NINETY-YEAR-OLD WOMEN WITH HEARING AIDS, because when I think of D&D I think of a lot of stuff.

Oh, I think of a few Dragon covers, for sure.  I think of the Red Box, because that was the first one I owned; I think of the AD&D 2nd Ed. PHB and DMG, because those were the first I used to play.   I also picture forests, and stonework, and funny dice and everything goes with it.

Mostly, though, I picture being 15.  I picture being 15 years old, on a Spring afternoon, on a Friday after school, and going to my buddy Kyle's house to hang out a few hours while we gathered up all the friends and got ready to play.  I picture Little Caesar's pizza trays.  I picture Larry Elmore art.  I picture photocopied character sheets with a Comliness box added in in ballpoint.  2-liter bottles of Mountain Dew.  Mechanical pencils.

I know, I know.  The point of Jim's question was to pick a piece of artwork, preferably to be found on the cover of something, which encapsulates D&D for you in one succinct stroke -- pictures being worth a thousand words, and all that.  I guess what I'm saying is that I'd like to but I can't.

But this one comes close, because I first saw it in Kyle's basement.  I've posted it before, so I guess that gets it as close to the distinction as anything ever will:  "Saving The best For Last" by Daniel Horne. 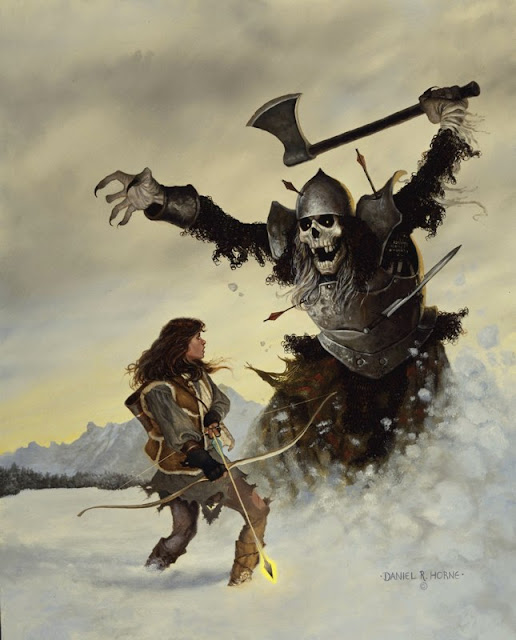