Let Me Tell You About My Character 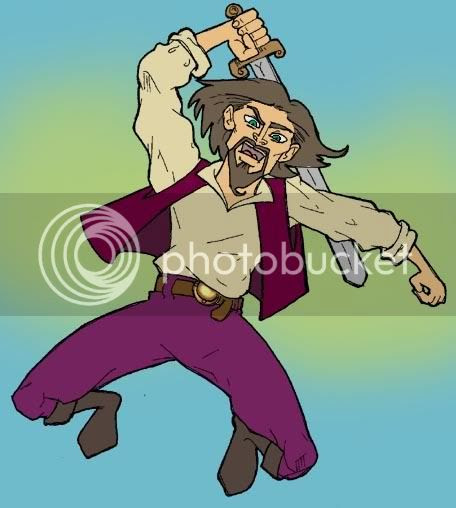 My wife is prepping a Fantasy HERO game inspired by Mediterranean stuff as opposed to European middle ages stuff -- most notably, it's influenced by Sinbad: Legend of the Seven Seas, a film which we both liked and feel is a horribly under-appreciated piece of American animation.

It has a great soundtrack, great performances, neat ideas and some gorgeous animation.

The film was considered a commercial failure in the US, where it became the lowest earning film of 2003 to be shown at 3,000+ theatres. It would earn an estimated $26.5 million at 3,086 theatres in the US, though it managed to gross $74 million worldwide. Because of this, it is the last traditionally-animated feature film made by DreamWorks, infamously proclaimed by Jeffrey Katzenberg that traditional animation was dead, feeling the American public were more interested in computer animation than watching drawings move. -- From the Wikipedia

That's...great, Katzenberg. Hey, you might wanna send the Japanese a memo, so they'll stop wasting their time sending us millions of dollars worth of moving drawings.

...Anyway. I developed the character of Aretas (that's him in the doodle) a while back, while I was working at The Worst Job Ever. He was originally meant for a Conan campaign, but I decided that he ought to migrate -- it's kind of in his nature. He really clicked with me, because he was an embodiment of a lot of things I needed at the time: he's bold, he's brash, he is beholden to no man. He is wrong in the head.

He is Conan, Sinbad and Han Solo rolled into one.

Birthed on silken pillows and fed from suckling on the finest of meals, raised under gilt, vaulted palace roofs and clad in the choicest silks of Aquilonia and Khitain, Aretas has grown used to luxury. All of his life he has known the finest and the best, according them all due respect.

But even one so wealthy and coddled has needs, desires, wants that burn deep and roiling in his heart -- Aretas craves adventure, wandering, zest! These piles of gold glitter most finely, and any man would lie and cheat and slay to have that in which he indulges every day. Yet no treasure desires he like the mad exultation of braving the unknown. His limbs yearn to swing free in the wild, and his soul longs to go where it will, to sample pleasures of far-off lands and to know that greatest of treasures:

For Aretas has long been cloistered in his civilized world of servant-girls and silken bedclothes, and now the lusty call of the savage, unbound Hyboria beckons to him.
Sword in hand, Aretas has stricken out of the palace and the garden, to seek fortune, pleasure and knowledge on his own -- never will a man give unto him anything that he can get for himself. The flame of life burns too short -- let it burn high, hot and wild!

It being a HERO game, I gve him a couple of superskills out of Dark Champions -- and a neat little power: He gets 6D6 Luck, but only when he's attempting something really, really stupid.
To The Fray!
at 03:29