"Creativity Is Hiding Your Sources"

Now there's something I learned from White Wolf and which I will continue to apply. However, I'm not so sure how much I feel like hiding these days: A memory from my gaming youth encourages me to steal inspiration rather than to expect myself to pluck it, unaided, from the very ether.

One of the best GMs I ever played with is Erik "Erko" Mayes. He's my best friend's older brother, and he used to run AD&D for us now and then, back in the day, when he was first in college. I think I only played an Erko game two or three times, but damned if they don't stand out in my memory.

One particular game featured a particular villain we were all familar with from other sources: Darkness, the horned bad guy from Legend. He didn't come over from that Ridley Scott flick alone, oh no no -- he brought his goblin henchmen Blix and Blunder along with him, not to mention some unicorns and a plot involving the theft of their horns.

I'm pretty sure that Erko made no attempt to disguise these characters and situations from us; I think that either he was epically unconcerned that we'd recognize them (i.e. he was lazy), or maybe he didn't think it would matter. Whichever his impetus, the game got on despite the fact that we recognized the characters, and we still had fun.

As I got older, I never forgot that episode (obviously), but I did start to see it in a different light. I thought, "Why steal something that boldly and plop it in your game? Where's the creativity? The uniqueness? The Craft?!" I vowed that I'd never stoop like that, that I would be The Very Creative GM Who Always Did Everything Brand New From Whole Cloth.

Trouble is, that way lies frustration. Trying to be innovative all the damned time is very consuming, very demanding. It's noble, sure; it's a suitable challenge for everyone. Flip that coin around and you'll find frustration, disappointment and anguish (esecially if you're a perfectionist like I am). It's that attitude that has made my gaming so difficult for so long.

In this day, I find myself revisiting that opinion, and that memory of the Legend-flavored game, from a different angle. I'm looking now at the facts, and these are they:

Erko stole an idea from another source and we all had fun anyway.

I'm finding it hard to argue with that. The dude was probably watching the movie, thought, "Cool, I oughtta have some players fight these guys", and ran with it. He went straight for the fun.

And why not? Sure, he could've changed the names a bit and twisted some new plot threads in, but in the end, we knew exactly who we were dealing with, what was going on, and what needed to be done. Furthermore, we had that villain and that situation all to ourselves, to handle in our way. It was a perfect example of "What If...?"

I still want to have my own ideas, sure. Good lord! Who doesn't? But all the same, what's the harm in taking inspiration rather than crafting it yourself? What's the real harm in nicking an idea, changing a few details, and letting it live in your game?

Thomas Edison* didn't invent the lightbulb. He just made one that worked.

I am no longer afraid to pluck something from elsewhere and use it for my own. It's not a lack of creatvity, it's just a shortcut to my own ideas. A starting point. Plus, it's not like my players are really gonna look down on me for it.

To that end, I have a new NPC for tonight's Iron Gauntlets game: Sir Mayhew of the Redmarsh, Knight of the Ring Argent. 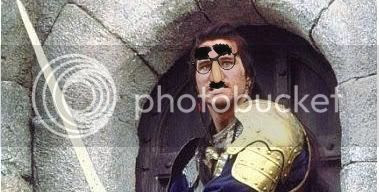 This oughtta be fun.


*Don't think for a moment I'm giving the guy props. Ever read up on him and Nikola Tesla? More people should. guy was a class-1 USDA certified dick.