"D&D Is Terrible For Anything But Combat": The Myth Asploded

A lot of people will argue until they're blue in the face that the D&D rules, as written, offer so much emphasis on combat and so little on any other activity that the game is ineffective at incentivizing or even facilitating any activity other than combat. This position is totally and demonstrably horsefeathers, and I can prove it using no more than a copy of the Dungeons & Dragons Rules Cyclopedia (published by TSR in 1991), basic reading comprehension skills and some words in English, because that's a good language to use given the circumstances. In addition, I will employ an overused internet meme as my abstract, because it'll be funny. 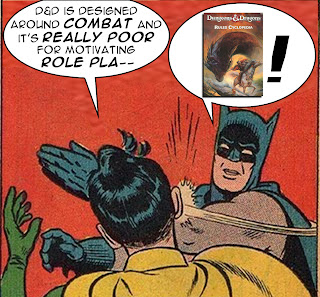 I used GIMP. I mean, for the picture. But for the real bitchslap in the face of my enemies I used mostly my eyes (to read) and my fingers (to type). I kept the latter out of the former because I ain't that stupid.

Okay, so no. If you think that Dungeons & Dragons offers no incentive for anything but killing monsters and taking their stuff, you have a head full of poo gas. Why? Because here's this from Chapter 10 of the Dungeons & Dragons Rules Cyclopedia, on p.127:


In the game, there are five normal ways for player characters to acquire experience:


Note that gaining XP "By Defeating Monsters and Opponents" is given THIRD PRIORITY here, while awards for "Role-Playing Well", that activity at which D&D is supposedly a "terrible"...um...thing, is first on the list. At the top. Of the list. Of ways to get XP.

XP-worthy role-playing is defined as playing one's alignment well, heroic actions and sacrifices, and other stuff such as --


...an emotional encounter with an NPC, reacting to the loss of a loved one, spontaneously composing a speech that motivates the army of NPCs and improves their morale, and so forth. If the demonstration of role-playing enlivens the game, impresses the DM, or makes for a very memorable scene, the DM may decide to give the player a bonus.

XP gain by role-playing is at a suggested rate of 1/20 the amount needed by the character to advance by one level. The DM is advised to only award XP for this activity once per game session. This means that, to increase in level, the other 80% 95% of the character's XP must come from the other 4 methods. So how easy is that? And of the remaining 80% 95% of XP needed, what percentages come from these other methods? Let's look at methods #2, #3 and #4 together, because they are related.

"When the characters achieve a major goal," says the RC,"award them experience equal to the XP Value of monsters defeated in reaching that goal." That's method #2 on the list above. Method #3 goes on to say, "Add XP Value of all monsters defeated; divide by number of characters who participated in their defeat; award the result in XP to each character who participated." As to XP gain via the collection of treasure, "Each 1 gp value of treasure won by a character = 1 XP earned by the character."

So it looks like defeating monsters, as an activity in D&D, ends up awarding XP twice...PLUS you get XP for grabbing all the candy that falls out. This suggests then that D&D is, after all, all about killing things and taking their stuff...

...until one reads the definition of 'defeat' in the context of the game rules (emphasis mine):


Characters earn experience points by defeating monsters and other opponents. Defeating a monster doesn't necessarily mean killing it; defeating an opponent can mean killing it, capturing it, tricking it into destroying itself, trapping it forever so that it can't menace the rest of the world, and so forth.

Thus we see that the D&D's supposed 'focus on combat' is misidentified, at least from the point of view of its designers. It's to be rewarded, yes, because the game is ultimately one of sword & sorcery adventure. But as we all know, such tales are not solely about blood and gold -- they're also about derring-do of one sort or another. Hence method #5 of gaining XP in the D&D Rules Cyclopedia:


When a player performs an exceptional action, the DM can award his character an experience bonus equal to one-twentieth (1/20) the base points he needs to get to the next level.

Looks familiar, doesn't it? But let's read on -- and do so carefully, because there are some fine points to consider here:


The DM has to decide what constitutes an exceptional action in your campaign.

Here we see that the DM is given great leeway in deciding what's 'exceptional' in his or her opinion -- and more to the point, what's worth another 20% 5% of a character's next level. So what criteria are advised to the DM in choosing what's an "exceptional action"?


As a rule of thumb, an exceptional action is a success that the character achieves when the DM didn't think he could, or didn't anticipate the clever means by which he achieved it.

Further, two common examples are given: saving allies from harm and exceptional use of skills. Dig the part about saving allies:

This type of exceptional action takes place when the PCs encounter a situation where the Dungeon Master fully expects them to be seriously hurt, and yet a character manages to save them from that fate in an unexpected and unlikely way.

For example, the PCs wander into a nest of vampires. A nasty fight is expected, and as the PCs walk in, the vampires rise out of their coffins. Suddenly, before any combat starts, one PC steps forward and announces that the PCs are representatives of a famous evil lord who wants to forge an alliance with the vampires, and if the vampires attack they're sure to miss out on a great opportunity for mutual gain. While the vampires listen in interest, he spins a clever story about a way by which the imaginary lord's minions and the vampires can take over this entire region of the country. The DM rolls for the vampires' reactions and finds them very positively disposed to the PC's offer. The PC arranges for another meeting in another place, and the PCs leave.

Now, the player character who wove this lovely tale of lies has done something very good. He kept his friends from being hurt in this surprise encounter, and he's set things up so that they can fight the vampires at a time and place of their own choosing. This is an exceptional action, and he should most certainly be rewarded for it.

I could be wrong -I mean, English is only my first language, an also I've just had a root beer and so my comprehension may be unaffected- but I think that the rulebook just advocated giving XP for being all clever and demonstrated how the existing rules, with no modifications whatsoever, facilitated a mechanical resolution to the players' action. Hang on, let me have some more root beer and look at that again:


[B]efore any combat starts, one PC steps forward and announces that the PCs are representatives of a famous evil lord ... The DM rolls for the vampires' reactions [presumably per the rules outlined on p.93 under the heading "Monster Reactions" and which account for the character's Charisma score] ...  the player character who wove this lovely tale of lies has done something very good ....  and he should most certainly be rewarded for it.

...huh. I'll be damned. Okay, but what about the skills thing?

Characters can earn experience bonuses for exceptional use of their special character-class skills and abilities. Normal, everyday use of these skills should not earn bonuses, but deliberate use of those skills in exceptionally difficult situations could.

For example, a thief could discover that a room has a very intricate trap on it; he knows he'll make his Remove Traps skill check at a dangerous minus and could be seriously wounded or even killed if he fails it. In such a case, the DM could award him a bonus if he deliberately takes on the task he knows is dangerous and successfully disarms the trap.

So now the DM is being advised to hand out XP based on luck as well as the players' ability to be clever, willingness to take mechanical risks to simulate dramatic tension and willingness to be ballsy enough to mess with the plot and get things done their way.

Well, that's another 20%  5% worth of a character's next level, right? So ultimately, after all this rigamarole, getting XPs for attempting and pulling off "exceptional actions" is no different from getting an XP award for role-playing...except for one difference that is stated and one detail that is omitted:

Unlike the in the guidelines for good role-playing, those for exceptional actions state quite explicitly:


There is no limit to the number of types of exceptional action in a campaign.

Also unlike the aforementioned "XP for RP" guidelines, XP awards for exceptional actions are not limited to one such XP award per session.

Soooo....unless I'm totally-motally stoned on crack, which I'm not because I'm a teetotaller and stick to hookers and blow*, the XP awards in the Dungeons & Dragons Rules Cyclopedia can be said to state that your players can spend an entire adventure without making a single to-hit roll and, if they are clever and ballsy, can go up one whole damn level if that's what the players and the DM want. You can get XP from killing monsters and taking their stuff, but you can also get it for not killing things (twice, in fact, since you get the monster's XP value once for defeating it without killing it and AGAIN for reaching the goals of the adventure), getting all into thespy and into character and for being heroic, clever and taking risks.

According to the rules.

That game that is supposedly all about combat and really poor at encouraging role-playing.

Only apparently it isn't bad at encouraging role-playing.

If you bother to read it.