Seriously, this is a 5-year dream for me. Literally; she's 5 ½ years old, and shortly after she wa born I had a dream about playing Dungeons & Dragons with her. Today, my wife Amber and daughter Lily and I sat down to play.

And it was my daughter's idea.

Lily had been talking about wanting to play for a while, and a couple of days ago she and my wife decided that, since Mommy was off today, we'd play when we got back from the grocery store. We put the groceries away, tidied up the living room a bit, and sat down at the table to make characters.

I decided to use Microlite20, since it would be fast and easy to play. Plus, character generation is short (especially if you leave out the skills, which we did) so there's less chance of boring the kid. She rolled her own dice and wrote down her own stats. 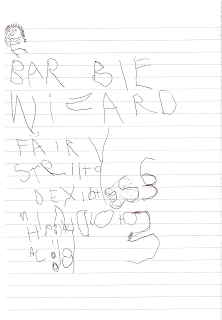 Lily played a fairy wizard named Barbie (I klooged up a Fairy race package: -2 to STR, but base AC 15) and Amber made an elven rogue named Serena. I asked them what their characters' favorite foods were; Barbie's was chocolate, Serena's was pears. I had a reason, trust me. With stats, appearances and favorite foods decided, we started the game...

Barbie and Serena lived in the village of Blackoak, and Barbie woke up one morning very excited because today was the day the general store was expecting the chocolate wagon to roll in. She flew over to the store where Mister Hooper (why not?) told her that the wagon was late. Oh no! He asked her if she wanted to wait for the shipment.

Lily took to the idea of playing right away when Amber and I asked her, "Do you want to wait, or do something else?" In her character's voice -a falsetto if ever I've heard one- Lily had Barbie declare, "I'm going to go find out why the shipment is late!"

Given the choice to go on her own or take a friend, she went to Serena's house to recruit her on the adventure. I kinda hinted that she should do that, but Lily did start making her own choices: Given the choice between investigating the road coming into town or the woods, she picked the woods. "We're going to investigate deep, deep into the woods," she declared in character. I told her that she knew that the woods might be dangerous and that there might be monsters...but my child, my daughter, my five-and-a-half-year-old little darling, was not to be dissuaded. "Let's go DEEP into the woods, DEEPER than DEEP!" she said.

My child is a sandboxer.

The pair went into the woods for a while but found no chocolate wagon. I rodded a bit by asking if they wanted to go look somewhere else or keep looking in the woods, and Lily chose to keep going into the woods. She sat on Mommy's lap mimed flapping her wings to show how Barbie was flying along. Priceless!

Eventually they got lost, and the woods got darker. Right about then, they heard footsteps in the woods but couldn't see anyone. Lily decided that Barbie would cast a Light spell, which revealed a goblin in a brown-and-purple kilt eating a bar of chocolate.

Much laughter from the child.

The goblin ran off, but Serena and Barbie followed. The goblin blew his roll to NOT trip and fall (I stitched in the SIEGE Engine from Castles & Crusades) and was confronted by the two adventurers. "You stole the chocolate!" Barbie accused, but the goblin naturally denied any wrongdoing and took off again.

This time, Lily had to roll to keep an eye on him; she failed. "I guess I fall down," she said dejectedly...but she took the failure very well. I was worried about how she'd handle failure, since it's part of the game; I'm proud to say that she just kind of accepted it, especially after we explained that the roll was not to navigate but to track. Somehow, she was okay with that.

My wife, obviously the more experienced player, suggested looking for goblin tracks or chocolate bits. I declared no roll was necessary, since Barbie had cast another Light spell. Sure enough -- goblin tracks and a wadded-up chocolate wrapper led into the woods.

"I'm going to go by myself!" declared Lily-as-Barbie, and when I described that she heard voices up head, my child --

-- Okay, I swear that this happened. I'm not making this up. Proud as I am of my child, I'll be the first to admit her shortcomings. I have to; as a parent, it's important for me to know her strengths and her weaknesses so as to better raise her.

My daughter, a first-time player, faced with an open-ended tactical situation, said:

Maybe I'm making too much of it, but it just doesn't seem to me that a five-year-old girl who is running around with a toy wand, pretending to be a fairy, would normally have the foresight to do that. Let me have my Proud Daddy moment.

Lily got under the table to simulate hiding in the branches, and I described the earlier goblin, a chubby one in a yellow camo-pattern kilt and a strong one with a sword in a black kilt discussing the fact that the fairy and the elf were in the woods. "If they find out we stole the chocolate," said the chubby one, "we'll be in big trouble!"

"They WON'T find out," snarled the strong one, waving his sword.

At this point I asked Lily, "What do you do?" She replied by miming spell-casting with her wand.

I explained that she had a spell tat would put the goblins to sleep, and one that would shoot a magic bolt. "Sleep!" she declared, and I described sparkles and stars and moons raining down from her wand.

"You don't have to," I explained. "I do." The chubby one and the strong one blew their saves; the original one was okay. Serena showed up and threw a rock at him for 2 hit points. Then, I announced the need for initiative rolls.

The goblin charged Serena for 4 hp, bare-handed; then it became Barbie's turn. Here, Lily -who was running around the living room waiving her wand- described the appearance of her Magic Missile -- "A bunch of candy flies out! EXPLODING candy! It flies out, and gathers up into instruments -- even CANDY DRUMSTICKS. And when he plays the drum, IT EXPLOOOOOODES!!!!"

Well, in no time, the goblin was set on fire and disposed of, while the sleeping ones were tied up. Upon waking up, the strong one said, "Let me go!" Lily pointed at him and said, "I took your sword!"

Then, she turned to my wife and said, "Mommy, can we play another D&D game?"

But it gets better.

It gets better because after I declared that they found the chocolate wagon and dragged it back to town (I didn't complicate things; why bother?), Mister Hooper rewarded the characters with a pretty ring for Serena and a potion of invisibility for Barbie.

Here's where it gets best of all: Lily said, in a soft voice: "I have something for you, too, Mister Hooper."

She walked over to her seat at the table, picked up a notebook, and carried it back toward me in upheld palms.

In a tender voice, my child handed me/Mr Hooper the book and said, "For you. If you ever need us again, just look up our number."

The three of us are playing again on Tuesday. "But next time," Lily says, "I'm going to be a warrior." 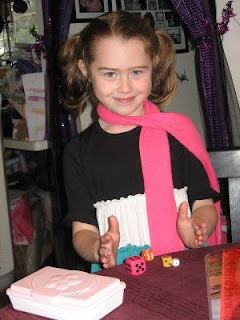