While looking around the web for Inkscape tutorials, I found a page that teaches how to draw your own liitle stick-figure dudes in Rich Burlew's "Order of the Stick" style. I played around with the style on paper, and said to myself, "MAN! This is a great way to say a lot with very few lines!"

Soon, I decided to try it out in a comic. This was the result: 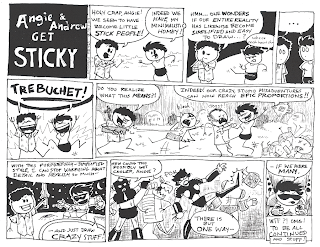 As you can probably tell, I had already begun to think of this style as a viable one to use for a comic series. Doing this comic was my way of talking myself into it.

I actually doodle a LOT at work. I pass them around to my buddies and the patient, supportive people kindly take them and laugh at them. I started to think -- why not draw pictures of them, too, and not just of Angie, myself and Jena (whom we'll meet soon enough)? Hmm. I wondered.

Then, my wife expressed a little bit of envy that I draw stupid cartoons of my friends at work but not of her. The next step to take was clear, and you can see that I had already decided on it by the end of that last comic. Naturally, this one followed: 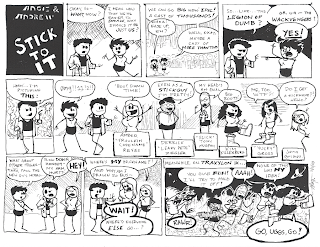 There are some in-jokes here, as is to be expected. The big boots are worn, in real life, by both Kim "Killenburg" Hillenburg and Allison "Yucky" Gross, but only during the winter. Leaky Pete there often makes "i'm pretty!" jokes, and they're great fun. Tony really wears that ankh -- in fact, he's the one I mentioned back in this post! I poke fun at Jena a lot because she is a truly sweet, funny, kind and admirable individual. And my wife has big boobs.

This series stretches out for 7 more strips, with an eighth one that I pencilled and began inking today. So...pack a lunch.
at 21:28