So I'm running a Traveller PBEM with some pals.

Anjiko-Z is playing Celeste Francisco, a 1-term ex-Navy gunner; Leaky Pete has Edward "Eddy Drake" Mallard, a 4-term Doctor. Circumstances have brought them to Valdaris (B774915-6 N Ga Hi In), where non-natives have a hard time getting employment within the corporation that rules the place. Ergo, Celeste and Eddy end up doing some, uh...freelance work. 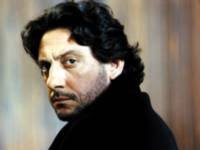 Robaur Maccardo, a fellow of their mutual acquaintance, needs some work done--he needs a vehicle repaired. It's an antigrav vehicle, quite the rarity on a TL 6 world; it'll start up but it won't get off the ground, and its computers won't boot up. Celeste has Mechanical-1 from the Navy, and Eddy's a Medic-4 but he has Computers-1, so thy have the skills. He'll pay these two Cr2000 apiece if they can fix this thing for him. They accept, even though it seems too simple AND after he says, "I offer you this work in confidence."

You might not know EXACTLY where this is going, but you have an idea of the neighborhood, don't you.

He drives them around startown to a fenced mechanical yard. "Remember," he says, "in confidence". He opens up the garage, and there's the vehicle, just waiting to be repaired:

If you're not a Trav fan, that thing is called a gcarrier; you might also call it a gravtank. As in, "military". "For him to have this," I explain to Anjiko and Leaky Pete, "is like your neighbor having an F-14 Tomcat."

So the two start poking at it. Celeste spends 10 minutes opening up panels and tightening bolts and so on, but can't figure out what's wrong. Eddy takes 20 minutes or so to readjust some power relays and stuff, and he succeeds in getting the computers to boot up...

...but the mainframe's boot order is jacked all to hell, so the turret's targeting program comes up first and starts acquiring targets.

Celeste declares that she'll start popping off panels and trying to cut power to the mainframe before the gcarrier starts killing everything in sight; I give it a 7+ chance that she gets that done (it's not that hard to pull out cable swhen they're all exposed to begin with, but it's NOT so easy to pull the EXACT one.)

I told Leaky Pete that Eddy can try another roll to either interrupt the boot order or just shut the thing down, but he has't mailed me back yet. Until then, the tension holds!

The only trouble is, we're fairly busy at work, so this has all taken 4 work days. It's slow going. I'm not put off by it, though, because it's FUN and it's WORKING. We're into it, and we are successfully goofing off without ngative effects on our job performance.

Still, I'd like to bust outta here with the two of 'em, go grab my wife, get a bunch of tacos and some Sangria Señorial and play on a tabletop like normal people do.