When I say these words, my wife does not believe me.

She's the main "Stargate: SG-1" fan in our home, which is not to say that I don't like it; I like it bunches. Hell, I saw the movie about 5 times the first month it was out. It's just that I just don't like it as much as she does. Then again, to say "I don't like Stargate: SG-1 as much as my wife does" is kind of like a priest saying, "I'm not as Catholic as The Pope."

Anyway, the other day I had the thought in question, and after mulling it over a bit, I pitched it to my wife. "Why?" she replied, frowning and twisting her lip, making what you might call "Bwuh...?" face. I think it's because Risus lends itself very well to a comedy game, and she doesn't see it as a match for a...well, SG-1 isn't totally serious, but you get the idea.

I, however, think it's a great fit.

"While it is essentially a Universal Comedy System," author S. John Ross says at the beginning of Risus, "it works just as well for serious play (if you insist!)."

Behold now as I insist. Lo, my list of

REASONS WHY RISUS
WOULD BE GREAT AS A
STARGATE: SG-1 RPG
1. THE SYSTEM IS NO MORE COMPLEX THAN "SG-1" NEEDS IT TO BE.
It's a fast-moving task resolution system which facilitates a swift pace. Comedy depends on timing; so does action. Risus' rules are light enough to be done with quickly, and definitive enough to give solid results with as much definition and detail as a good GM really needs. 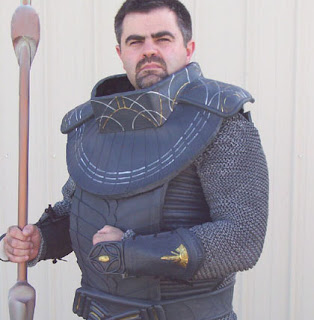 2. IT'S EASY TO MOW DOWN TONS OF JAFFA WITH JUST A FEW DIE ROLLS.
On the show, Jaffa are rarely so much a threat as they are an obstacle. The "Grunt-Squad" rules in Risus are tailor-made for the things that Jaffa do in a story, which is, basically, get killed off bit-by-bit or, if you're not lucky, capture you. Furthermore, if it's not a whole ton of 'em that needs blown away but rather just a couple of 'em, you can just roll against a straight Target Number to smoke their snake-bellied asses.

(A Quick Aside: If you have your freebie copy of Risus but not the Companion, you are really, really missing out. It's useful beyond Risus, and the "What The Heck Kind Of Conflict Is This?" Flowchart on p. 49 will -I repeat, will- take your understanding of the game to the freaking limit.) 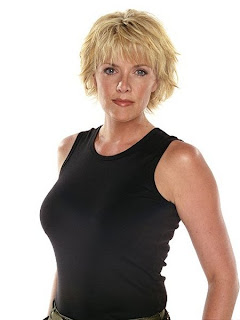 3. STARTING RISUS CHARACTERS ARE SUITABLY COMPETENT WITH THEIR ON-SCREEN COUNTERPARTS.
This point breaks down into two parts: first off, you can scoot the TN scale down a little bit to reflect the general badassity of the average SG team member. Second, it's not hard at ALL to create a Decorated Air Force Pilot With A Past (4) or a Smarty-Pants Archaeology Professor (3). See? I just did it.

4. NO NEED FOR EXTENSIVE EQUIPSTUFF LISTS.
Oh, they're fun all right. But Risus's "Proper Tools" rule assumes that you have whatever you need in order to do what you do with your cliché, and has built-in mechanics for those cases when you don't. If you've seen the show enough, you know what those things are. Furthermore, it's not real hard to differentiate mechanically between a pistol, a P90, and a big-ass staff cannon.

For whacking a Jaffa, say, a P90 is considered a Proper Tool. You roll your appropriate cliché and that's that. A pistol is also proper, but as everyone knows, a little less effective; maybe you up the TN to kill him. A big-ass staff cannon, however, is more than proper; that's worth an extra die, if you ask me.
5. STARGATE-THEMED LITTLE CARTOON BASTARDS ARE DAMN EASY TO DRAW. 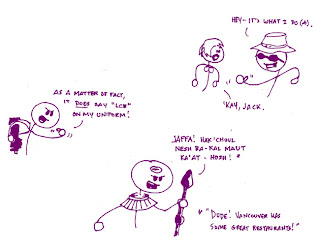 I think my point is made.