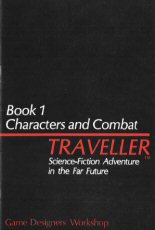 So recently El Jeffo de los Rientos posted a link to somethin' called Rule 68A, suggesting that it was a must-read for people who like-a the Traveller (which is me). Being one to trust his advice I made click on the link and, as the kids say, "got my read on".

I won't re-hash Rule 68A, but I can give you an overview:

Basically, there are those long-time Classic Traveller players and referees who feel that CT lacks a clearly-presented task resolution system, and 'patches' for that have been appearing since the 1980s. The author of Rule 68A, who has himself written a task resolution system (and a popular one at that), at one point said to himself, "Whoa, hold on. There is a task system, it's just not structured. So let's put a bit of structure on it." And then he did so. 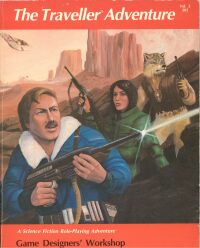 Referencing a great little passage in The Traveller Adventure, WJP (the author's handle on Citizens of the Imperium) puts forth that CT has plenty to work with already, and that if you can just remember 3 levels of difficulty and the numbers associated with them, you can use the existing CT rules just fine.

I read the article and I read the passage and you know what? I agree with him. Man, I shoulda read pages 28 and 29 of The Traveller Adventure a long time ago.

Basically, the idea is not to shoehorn the game into a system, but rather to use the game more loosely, and adjudicate things on the fly. No need to couple characteristics and skills -- the Ref may wish to do so but it needn't happen every time. Rolls can be 2d6 equal to or less than a characteristic, or two of them, or whatever. Margins of success can influence further rolls. Situational rolls can e based around the same 3 difficulty levels at need. Target numbers can be randomly determined.

In other words, it's making me look at Traveller as kind of a meta tool kit, more so than I had before. In a sense it's like...

...it's like the lack of hard-and-fast rules isn't a hindrance, but rather free reign to improvise them.

It's kind of neat to look at it this way. It's like Traveller can now be more my game than it ever was; I'm now truly the Referee, not just The Guy Who Is Running The Game. I have yet to implement this idea, but I do have an open game with my wife to test it in, so I'll let you know.
at 13:03