Well, y'see, I loves me some RPGs.

Okay, you knew that. I mean, duh. Thing is, though, I love to collect the damn things, too. Got tons of 'em.

All of 'em get read, but not all get played. It's not that I don't want to, it's that there are only so many hours a week in which I can game, and then, getting players other than my wife is a bit of a hassle. 10 miles out of town, I'm ashamed to ask my players to drive out. Thanks, oil companies.

Anyway. Not all the games get played. It's a shame, really, because I've got some great stuff in that collection, stuff that I know I would enjoy running. Like -- well, hey, like Teenagers From Outer Space, f'r'instance. 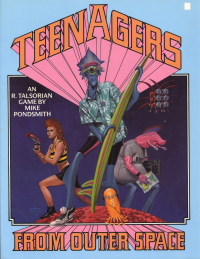 Teenagers From Outer Space (or TFOS, properly pronounced "TEE-foes") is a comedy/SF game from 1987, written by Mike Pondsmith (with contributions from Greg Costikyan) and published by R. Talsorian Games. The premise is a simple one: Aliens encounter Earth, decide it's the coolest planet in the universe, and they start sending their kids to school there. You, the player, take on the role of a high schooler, be you human or non-. Crazy teenage shenanigans ensue.

The game was obviously inspired by anime and manga; in fact, the newest edition of it is billed as an "Animechanix" game. Back in '87, though, I guess maybe Pondsmith didn't figure that anime references would feed the bulldog, so the original edition of the game has a totally different look -- at least, MY copy of it does. I have the one with the Wayne Barlow cover and the anime references are there, but they're subtle. I overlook them.

(In fact, I used to have the new, all-anime all-the-time one, but I traded it for the old one with a dude from RPG.Net, long ago. I'm happier this way. It's not that I dislike anime, it's just that...well...I'm tired of it.)

Anyway, this game is a gem. It's custom-built for crazy, with an open, explicit disregard for realism and, in some cases, common sense. It's like Toon with a narrower focus -- which, in my opinion, makes it easier to get funny. You can't get killed in TFOS; you just get "bonked" and have to sit out for a while. Your character can be a Human, a Near-Human, a Not-Very-Near Human or a Real Wierdie. Everyone gets powers, even the Human kids -- theirs are more mundane (comparatively, anyway) than the ones that the aliens get, but any human can tell any alien any fact about Earth, no matter how stupid, and the alien will accept it as gospel freaking truth.

If you are not, at this moment, considering the 31 flavors of mayhem that this can engender, this game is not for you.

Mix in goofy SF gadgets and genre clichés, teen lust (never consummated, always frustrated -- it's funnier that way), high school clichés and whatever else you feel like, and this game brings the loco.

So. How would I run it? Well, not being into anime and stuff so much, I'd go with my gut and make the world my own -- It'd be set in an alternate, SF-soaked 198x, sort of like Square Pegs meets Futurama. No sailor-girl outfits, no furries. Plenty of space invaders, robots, hawt chicks, and probably Phoebe Cates. 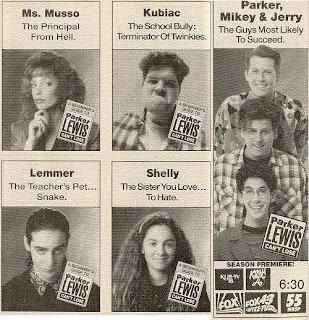